I meant the title El Dorado to be only partly ironic. The Spanish term itself, once mysteriously evocative, has become part of the banality of real-estate brochures and luxury automakers. But when first used in the New World by the Spanish explorers and missionaries it summoned an image of a virginal, untouched Eden, an uncorrupted paradise of natural abundance. In our own time “el dorado” also has paradoxically come to hint at its opposite: corruption, defilement, abuse, and the befouling of one’s own nest.

The music is cast as a large, two-movement diptych. Part I, originally called “A Dream of Gold”, is a landscape subject to human abuse, like one of those twisted, tormented photos of toiling Brazilian miners by Sebastiao Salgado. Its energy is that of the archetypical “machine in the garden”, mindless, automatic, inexorably consuming. Cast in the form of a single, ascending ramp, the music moves with the implacability of a powerful excavator, bulldozing its way toward a point of barely controlled orchestral chaos.

“Soledades” (“solitudes”) is the polar opposite of the first part, a landscape entirely without the human footprint. An Arcadian vison expressed in pure modal scales and harmonies, its mood never quite sheds the subtle melancholy often found in the work of great nature writers such as Barry Lopez or Edward Abbey.

There is little doubt in my mind that El Dorado was the result of watching the slow but irreversible advance of human development and exploitation of the natural setting, particularly as I witness in rural California. The effect of the human species on the planet is a conundrum. We are part of the natural ecology. We don’t stand apart from it, yet we bear the responsibility for our unique powers. It is a theme that I would return to in different guise fifteen years later in Doctor Atomic.

Further writing about El Dorado by Michael Steinberg is in The John Adams Reader.

Reproduction Rights:
This program note can be reproduced free of charge in concert programs with the following credit line:
Reprinted with kind permission of www.earbox.com. 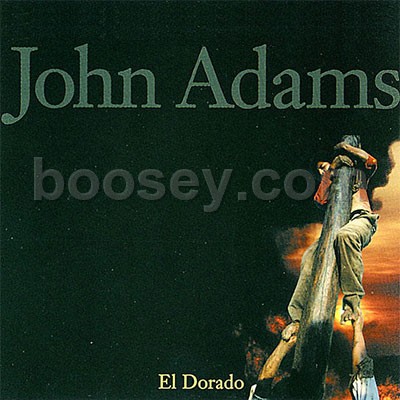