‘Music has the capacity to breathe harmony into the soul.
The Peacemakers breathes the harmony of peace.’
Terry Waite CBE

‘The Peacemakers is dedicated to the memory of all those who lost their lives during armed conflict: in particular, innocent civilians. When I composed The Armed Man: A Mass for Peace for the millennium, it was with the hope of looking forward to a century of peace. Sadly, nothing much has changed.’
Karl Jenkins CBE

The Peacemakers is a work extolling peace. One line, from Rumi (the 13th-century Persian mystic poet whose words I have set) sums up the ethos of the piece: ‘All religions, all singing one song: Peace be with you’. Many of the ‘contributors’ are iconic figures that have shaped history, others are less well known. I have occasionally placed some text in a musical environment that helps identify their origin or culture; the bansuri (Indian flute) and tabla in the Gandhi, the shakuhachi (a Japanese flute associated with Zen Buddhism) and temple bells in that of the Dalai Lama, African percussion in the Mandela and echoes of the blues of the deep American South (as well as a quote from Schumann’s Träumerei (Dreaming) in my tribute to Martin Luther King. ‘Healing Light: a Celtic prayer’ is just that, with uilleann pipes and bodhrán drums. I have also presented some odd combinations, such as ‘monastic chant meets the ethnic’ in ‘Let there be justice for all’ and ‘Inner peace’.

Having decided on The Peacemakers as the textual core and title of my new work the search was on to find messengers of peace. A handful of obvious figures came to mind, figures that have changed the world, such as Gandhi, Mandela and Martin Luther King, followed by such iconic and inspiring people as Mother Teresa and Anne Frank. Having sourced suitable and pithy text from these the net was cast to find other ‘peacemakers’. I had been aware of Albert Schweitzer as a boy, in part because my organist father had recordings of him playing Bach, and I had previously set the Persian mystic poet, Rumi, in my Stabat Mater. I felt I needed something from the Abrahamic religions, so there are words from Christ, the Qur’an, Judaism and St Seraphim of Sarov (a Russian Orthodox monk), while St Francis of Assisi is included by association. I also quote from the Old Testament Book of Isaiah in my homage to Martin Luther King, as he did in his ‘I have a dream’ speech. English poets, Shelley and Malory are heard, as is Bahá’u’lláh, the founder of the Bahá’í faith. Carol Barratt added further text with the odd sentence from me. Some anonymous traditional text has also been included. I feel privileged that Terry Waite CBE has contributed some wonderful words, especially written for The Peacemakers. 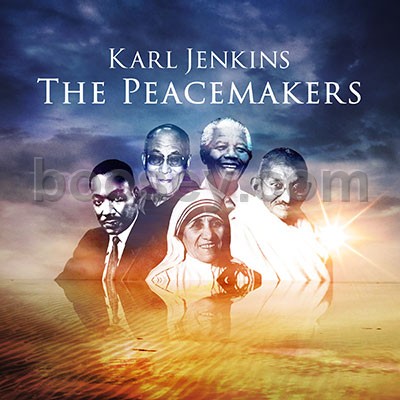