“The task [of reflecting Mahler’s masterworks] was assigned to that most genial of living Viennese composers, Kurt Schwertsik. Mahler’s Seventh Symphony, with its two “night-music” movements, had been the entrance point for his 20-minute BBC commission, Nachtmusiken. No things that go bump in the night here: rather a suite of occasional character pieces, an offering of fragrant Viennoiserie, evoking a series of departed spirits. Those spectral presences include Janácek, whose characteristic inflections merge and mingle as in a dream, and David Drew, the critic and writer who died last summer, who is remembered in the eulogy of a quartet of cellos, frosted by glockenspiel. In between an accordion spices a bittersweet Viennese waltz, a toy march hovers between West and East Europe and the final fugue is touched by a frisson of Mahler’s First Symphony.” Times

“Attractively scored, it was played with considerable finesse, and its elegance contrasted with the cataclysmic performance of Mahler’s First that followed.” Guardian 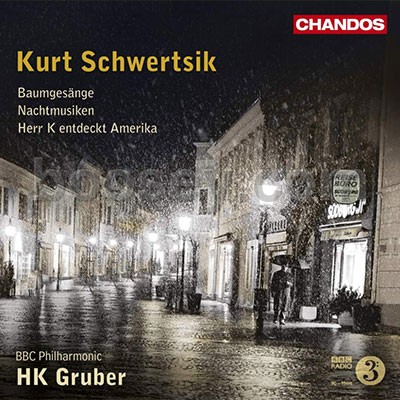