Many of the composition techniques used in the last 50 years are adopted in this work, often in contrasting ways. There is a commentary on the application of many of the techniques: a late romantic style is dissolved in a cluster of notes. However, normally the different styles are not affected, but retain their own style, sometimes combined with another, or the two styles may overlap.

In the third minute, six different composers are quoted literally, but there are many more fragments in which a reference is made to a composer or a style. Therefore the literal quotations should be viewed as a (far-reaching) consequence of the ‘style’ of this piece: its lack of a style. When a work contains fragments in the style of Penderecki, French film music, Boulez etc., it actually has no style in that particular sense of the term ‘style’. It contains too many styles to have a style. That is not what this work is about.

With these stylistic quotations, I go back to 1870, the year of the birth of the first composer for whom musical style was not synonymous with personality: the composer, Charles Ives. He wrote twelve tone music long before Schoenberg, breaking the laws which Schoenberg had yet to formulate. Unfamiliar with the European tradition of elitist music, he made use of brass bands, choirs and popular hymns without caricaturing them, as rich musical sources in a totality of musical events for the first musical reality in the history of music.

Anachronie I was dedicated to Charles Ives, one of the few composers who found music more interesting than himself. 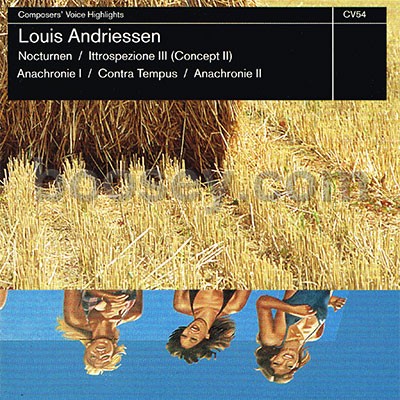