"The opera takes the aged Athanasius Kircher on a time-travelling journey back through the important events of his life, on which he is guided by a boy who may be an angel or an apprentice devil, even perhaps a reincarnation of the scholar himself as a young man... There are elements of allusiveness and surreal fantasy to Kircher's adventures and encounters, which seem to take place in a Bosch-like world of grotesques..."
Opera

"...a dizzying work that's vast in its scope yet unerringly claustrophobic. Musically, it is brilliant and deep... Andriessen is the great argumentative opera composer of our day... a clear-eyed Dutch sceptic and humanist who surfs the alarmingly narrow arteries that separate life from death, wisdom from belief, the known from the unknown... Andriessen's music compels from start to finish."
Los Angeles Times

"Using a mixture of languages, children's songs, Baroque music, jazz and modernism, it's a dizzying kaleidoscopic creation from a master of stagecraft."
BBC Music Magazine 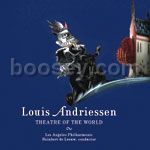