Ars Moriendi, Latin for "the art of dying well", was a term used to describe a visual art practice common in the 16th century. The pictures that I have seen depict a dying man in bed, surrounded by the benevolent figures of family and clergy while some evil, gargoyle-like creatures skulk and fornicate in the corners—allegories for the struggle between good and evil competing for a new soul. These works were often presented as a series in books that priests used to inspire members of their flock to a good death: death with dignity.

My composition does not represent an inspirational, hypothetical death, but rather a personal diary of my experience with my father’s death, which I regard as among the richest, most profound experiences of my life.

My father had a massive stroke in 1990 and fought hard to recover much of his speech and movement until the fall of 1993 when he suffered another stroke or, perhaps, a series of small strokes. My wife and I, returning from a trip to Europe, were greeted at the airport by my mother who immediately told us that he had taken a turn for the worse and seemed near death. We went to see him in the hospital where we found him to be completely uncommunicative and taking desperate, gasping, wheezing breaths. We spent the next couple of days at his bedside believing that he somehow felt and appreciated our presence but we could not imagine that he could hear us.

On the third day the nurse said to my mother and me that she thought my father was a real fighter (she got that right, metaphorically and literally: as a midwestern child of the Depression he earned his college tuition as a professional boxer). The nurse felt that he might be able to understand us in some deep sense and in fact, might need our permission to let go. The nurse left the room, and my mother and I went to his bed and told him that he had been a good father and a good husband. We assured him that my brothers and I were making our way in the world and that my mother was taken care of, so it was okay to let go; he didn’t need to fight anymore.

Seconds after my soliloquy ended I heard, with my head on his chest, what seemed like a last heart beat, and as I looked up, startled, I literally saw the life leaving his body. An ashen gray color moved quickly and evenly from his toes up his legs, through his hospital gown, to his chest, over his face and to the top of his head.

Ars Moriendi is 24 minutes long and is in nine tableaux played without pause, except for a break between the sixth and seventh movements. The first six movements have distinct beginnings and endings but are performed attacca, while the last three movements are seamlessly connected.

The titles of the first, third and sixth tableaux are pieces of advice that my father shared relentlessly with my two older brothers and me. The music doesn’t really attempt to capture the sense of these nuggets of wisdom, but these movements are, in general, reminiscences of my father’s character in his prime: his athleticism, quick wit, the funny dances he did, and the way he yodeled rather than yawned when he got sleepy while driving. The first movement begins with my rendering of the sounds of the hospital, of my father’s labored breaths and his struggling heart. These sounds of his condition served both as a back drop and as interpolations to our nostalgic musings on his life. When thinking about his last days, I am reminded of a quote from a letter Rilke wrote to a friend: "Everywhere, death permeated life like a peculiar spice in life’s powerful flavor." This is the source of the title of the fifth tableau.

The second, fourth and seventh movements refer to the musical genre, especially common in the 16th and 17th centuries, known as the lament. These works were usually based on a recurring descending bass pattern or ground bass. The first two "lament fragments" tease out a pattern from elusive and disoriented textures. The ground bass becomes explicit and recurring in the Third Lament and by the end of this movement the pattern is shortened to the same four-note bass line that Monteverdi uses in his madrigal Lamento della Ninfa.

The last two movements, flowing continuously from the Third Lament, deal with the nitty-gritty of my father’s death: the gravity of the occasion, his pathetic struggle to cling to life, his family’s urging to let go, and the tide of ashen lifelessness flowing up from his toes and leaving through the top of his head. My father loved Londonderry Air (AKA "Danny Boy") and enjoyed torturing me by plunking it out awkwardly on any piano he came across. It seemed fitting that this piece, written in his memory, frequently drifts through the pentatonic world of that song and culminates in an explicit setting of the melody, harmonized by the lament ground bass. Coincidentally, the words of the song—at least in my father’s rendition—are also about saying goodbye: "Oh, Danny boy, the pipes, the pipes are calling."

Reproduction Rights
This program note may be reproduced free of charge in concert programs with a credit to the composer. 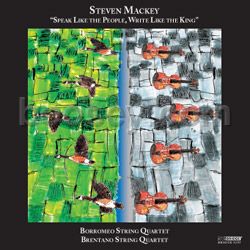