Much more,
For alien powers have become familiar
To us in a human way.
(Friedrich Hölderlin)

My orchestral cycle Sphären (‘Spheres’) consists of six pieces. The first five pieces were written between 2001 and 2005. After the death of my wife in January 2006, I added a sixth piece. The whole cycle is dedicated with love and gratitude to Ursula Höller-Heidemann.

Within my oeuvre there are several works (for example, Mythos/Myth, Schwarze Halbinseln/Black Peninsula, and Tagträume/Day Dreams) that are subtitled “sound poem.” This term, which I coined, alludes to the poetic moment or the literary references in these works, but in no way implies “program music” – to the most outstanding works of which, by the way, not the least objection can be made – and therefore any attempt to classify them as Romantic or late-Romantic is entirely out of place.

As a composer, it is not and never has been my intention to use music as a “demonstration” (of principles of structure, tonal effects, etc.) What, then, does my music bear witness to? It tells above all of processes and spheres of experience (already in 1971, I spoke of “fields of experience” in regard to the structure of my electronic composition Horizont/Horizon). Thus my Spheres do not draw upon the ideas that have haunted the musical world since antiquity, of a music of the spheres, or even of a harmony of the spheres, but – if at all – upon the nature-philosophical reflections of an Empedocles in which the four elements – air, water, earth, and fire – played a central role. Since then, and up to the present day, they have time and again stimulated the imagination of artists and inspired new creations.

Hans Magnus Enzensberger’s poem cycle Wolken (Clouds) could be cited as one of the numerous modern-day contributions to this subject area. But my work does not have any direct connection to such literary manifestations. Nevertheless, the involvement with these poems was just as stimulating as that with Peter Sloterdijk’s major work Spheres in which the metaphor of “decantation,” that is to say, the pouring of old wine into new containers for the purpose of revitalization, has a certain importance. Not least, the concept of the “globular (or spherical) form of consciousness,” formulated by Henri Bergson, has for a long time also had a permanent place in my world of imagination.

“If there is a sense of reality, there must also be a sense of possibility” (Robert Musil). Correspondingly, I am not interested in the as realistic as possible portrayal of extra-musical phenomena with the means of music, but always in the question of how my personal imagination or idea of such phenomena can be expressed in music, but without their immanent logic being affected. Imagination (Latin imagio: picture) has at least two fundamental characteristics: it helps the “pale cast of thought” (Hamlet) attain color and plasticity, and gives direction and structure to the aimlessly rambling fantasy. It produces tonal images that – even when they derive from known phenomena – do not stick to them, but respectively break loose from them, circle them, or transform themselves into something else. Their goal is not ideological concepts with which the existing is to be confirmed or negated, but the bringing-into-the-world of distinctive characters (with all their maladjusted qualities).

I do not consider it necessary to elaborate on the individual movements of Spheres, since on the one hand the titles speak for themselves and, on the other, individual listening experiences are indeed stimulated, but should not be channeled by them. Concerning the background of the work’s genesis, it suffices to say that the first four sound images owe their existence not least to my regular sojourns in the North-Italian alpine-lake landscape and the associated impressions of nature. The fifth piece (“Fireworks”), whose inclusion in the cycle was planned from the beginning, is the orchestrated version of a piece for chamber orchestra that I composed in 2005 for the seventy-fifth anniversary of the founding of my home town of Leverkusen. Two quotes are woven into the texture of the last piece (“Mourning of the Spheres”): an orchestrated version of “Tastengeläut” from my piano cycle Monogramme (Monograms) and an excerpt from the second movement of the String Quartet no. 14 (“Death and the Maiden”) by Franz Schubert.

With his orchestral cycle Sphären (“Spheres”), composer York Höller created a work that draws together the artistic and personal experiences of the past decades as if into a focal point. Spheres consists of six “sound images” of various character of which the first five were written between 2001 and 2005; after the death of his wife, Ursula Höller-Heidemann, in January 2006, Höller added the sixth, concluding movement and dedicated the work “with love and gratitude” to her memory. With the associative naming of both the cycle and the individual movements, the composer brings into play an evocativeness at the title level that in various ways mirrors some of the stimuli and impulses of the work’s genesis, yet transfers this web to a super-personal level, where it functions – detached from Höller’s person – as the foundation for communication with the audience.

Already the image of spheres, which gives the work its title, has a corresponding effect: initially it is reminiscent – in the sense of the term “sphaira” from ancient Greek philosophy and mathematics – of a round, self-contained whole and all-encompassing totality. In terms of this meaning, it can be understood as a cipher for the synoptic character that the Spheres cycle occupies in Höller’s oeuvre, since it represents the sum of his compositional experiences, so to speak. In an entirely exemplary manner, the composer realizes here his idea of an art work as an “organic-energetic system” in which all component parts not only relate to one another functionally, but also trace themselves back to uniform structural elements. These are the so-called “sound figures,” which – comparable to human genetic material – carry embryo-like within themselves all the work’s melodic, harmonic, rhythmic, and formal possibilities of development and unfold them during the course of the music. Each individual movement of Spheres thus attempts to fathom certain readings of the “sound figure” on which the whole cycle is based, and allows each to come to the fore in its own individual manner, but nevertheless also related compositionally to the other pieces.

In the opening Song of the Clouds, this takes place by means of layers of tone colours that interact with one another, but also by means of melodic contours that emerge from the multicoloured composite sound and later lose themselves in it so that similar elements continually appear in a new light and gain a different profile. On the other hand, the second movement, Wind Chime, which takes finely branching arpeggios, trills, and scale fragments as its point of departure, is based on the elaboration of filigree figurations that lend the orchestral texture an element of lightness as a result of the preferentially employed high registers. Höller formulates a contrast to this in the following Layers of Earth in which he primarily links sonorities located in the low registers to slow harmonic progressions, thus lending the movement an element of gravity that occasionally leads into phases of sound agglomeration. The fourth movement, Rain Canon – which places special emphasis on the rhythmical element above all by means of dry plucked sounds – is based on the regularity of the eighth-note pulse that is counterpointed and enshrouded by proportional, canonic voices in diverse ways.

While the atmospheric alternation of the first four sound images, according to Höller’s own commentary about the work, is indebted to “regular sojourns in the North-Italian alpine-lake landscape and the associated impressions of nature”, the fifth piece, Fireworks is the orchestral adaptation of an ensemble work that the composer wrote in 2005 – with a view to a later integration in the Spheres cycle – on the occasion of the seventy-fifth anniversary of the founding of his hometown of Leverkusen. With its continual metamorphosis of the musical gesture, which conveys an appearance of spontaneity, with the eruptive sound elements alongside more tranquil surfaces that are animated within themselves, and finely woven soloistic lines, the movement gives the impression of an intensified and strongly profiled counterpart to the play of melodic contours in Song of the Clouds.

A further meaning of the titles becomes obvious in view of the subsequently added sound image Mourning of the Spheres, particularly if one follows the composer’s reference to Peter Sloterdijk’s philosophical magnum opus Spheres, which he specifies as his literary inspiration, and considers it together with the dedication to his deceased wife. For Sloterdijk uses the term “spheres” for that realm of experience and perception in which the polarity of a pair made up of two people becomes the jointly understood ontological relationship of belonging together: a relationship that is however always threatened by instability – most seriously by the death of the counterpart. Against this backdrop, the Mourning of the Spheres can also be understood as an artistic attempt to come to terms with an existential crisis: Höller based it on the piece Tastengeläut from the fourteen-part piano cycle Monogramme/Monograms (1995–2003), thus yielding to the associations of bell sounds inherent in its texture. In the new tonal guise determined by the orchestra’s characteristic layers of color, the model is preceded by a mostly chordal introductory section that is harmonically based on the first segment of the sound figure of Spheres, and that binds the movement closely to the other five pieces. In terms of melody, it has incorporated in it the structures on which Franz Schubert, taking recourse to his own Lied of the same name, based the variation movement of his string quartet Death and the Maiden, a theme that Höller then works into the texture as a sound symbol during the further course of the orchestral piece, allowing it to appear as a concretization of that which was melodically and harmonically in any case already hidden in the music. With this “memento mori”, Höller brings to an end a trove of experience crystallized into music, which is striking in its expressive intensity, and that desires to encourage the listener to experience the music.
Stefan Drees, 2009 (translation: Howard Weiner)

“A beautifully sounding 40-minute kaleidoscope… We heard (and saw) in the phrases and shapes of the Wind Game the dust or the leaves creating a stir, and enjoyed in the pizzicato study of Rain Canon how the water dropped, splashed or hit the metal. In Firework, a catapult of embers raged, while in Earth Layers you could have sworn that blocks were forming, shifting and piling up on top of each other. And beyond all these individual sensations, the magic Spheres were spreading radiance, enigma and debauchery.”(Gerhard Bauer, Kölner Stadtanzeiger, 09 Apr 2008) 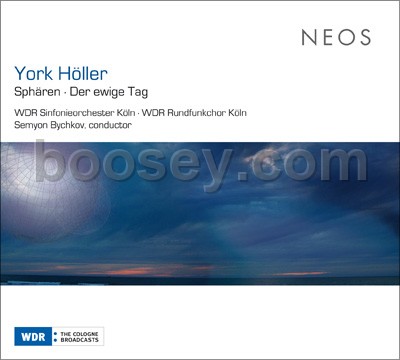