Prologue
A car crashes—a chorus looks on and comments on the victim.

Act I: The Funeral Home
Sam stands immobile and mute at the funeral of his wife, Dinah, as their friends and family circle uncomfortably. Their two grown children, Junior and Dede, as well as Dede’s husband (and Junior’s lover), François, are late for their mother’s funeral. Sam is estranged from his children—Junior, who is mentally ill, had fled to Quebec to dodge the Vietnam draft, and Dede and François live with him there and care for him. After the service, Sam excoriates the three of them, venting his anger, sorrow and confusion in a blistering, wrathful aria.

Junior loses all self-control, stripping off his clothes burlesque-style and accusing his father of killing his mother. They come to blows over Dinah’s coffin, which crashes shut. Sam storms out, followed by Dede and François. Junior, alone, looks over the wreckage of the funeral as an orchestral Postlude, perhaps the most searching, searing music Bernstein ever wrote, closes the act.

Act II: The Family Home
Later that night, Sam reads in Dinah’s diaries of her unhappiness and despair, and her anger towards Sam. He discovers a letter from Dinah, but cannot bring himself to read it. Dede enters, ending Sam’s reverie, and together they go through Dinah’s closet. Dede tries on Dinah’s dress and Sam is stunned at the resemblance—father and daughter tentatively connect with one another.

Meanwhile, François confronts Junior about his outrageous behavior at the funeral. Junior has a psychotic episode in which he conjures painful fantasies, first of his father shooting him as a child, then of an incestuous relationship with Dede. François finally gets Junior to sleep, and he and Dede meet outside, where he sings her a passionate aria about how much she means to him. Sam goes into Junior’s room and looks at his sleeping son, but he is unable to bring himself to kiss him goodnight. He returns to his room and finally reads Dinah’s letter.

Act III: The Garden
The next morning finds Dede weeding her mother’s garden. She and Junior play games from their childhood. François and Sam enter and join in. At the height of their game of tag, François hurtles into Sam’s arms—Sam embraces him and welcomes him to the family. He asks François to take Dinah’s letter and read it to the family. It is a suicide note—Dinah asks her family to "Accept, and live." Sam tells the family that there were Christmas cookies with the letter. Dede stifles an awkward laugh, and then suddenly the tension breaks and they are all roaring with laughter. Dede suggests they might stay on with Sam a few days—but they lose the thread of the tentative happiness they’ve found, as a discussion of who will sleep in which room becomes another fight. Francois lashes out at the family for their inability to escape their past, and tears up Dinah’s letter. Dede, Junior and Sam collect the scraps scattered on the ground. Junior tells Sam that "it hurts so much to mean so much to you" and Sam finally embraces his son. François in turn reaches out to Dede, who, mustering all her courage, takes his hand. Sam and Dede reach out tentatively to one another as the curtain falls.

"Bernstein moulds the text into a ductile parlando, comments on and interprets the dialogues in the orchestra – and there is one thing he can do above all: transform complex feelings into melodies that sometimes wind around in free tonality, sometimes sound blues-like, or follow other patterns. The epilogue of the first act consolidates into a touching baring of souls.”
Die Presse 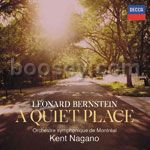