At the den of Peachum, a receiver of stolen goods, he and his wife ponder the value of various rogues in their employ before turning their attention to the highwayman Captain Macheath, on whom their daughter Polly dotes. When Mrs Peachum and her husband charge her with having married Macheath she is forced to admit it. They console themselves with the prospect that he is likely to be impeached soon for his activities (by them, if no-one else) and Polly left a wealthy widow. She, however, is horrified, and confesses all to the Captain: they decided to part temporarily for safety’s sake. At a tavern near Newgate Prison, a criminal gang assembles with a view to waylaying a coach on Hampstead Heath. Macheath warns them he must lie low for a while. With the others gone, a bevy of loose women enters to entertain him though, primed by Peachum, they are actually there to betray Macheath, who is handed over to the constables as the act ends. In Newgate, Macheath offers to marry the jailer’s daughter, Lucy Lockit, but her father and Peachum have already hatched a scheme to share the reward due on his execution. The arrival of Polly with her alternative marital claims confuses the issue further: the two women come close to blows. Eventually, Lucy manages to free Macheath with some spare keys, but he is later recaptured. Having failed to poison Polly, Lucy and her former rival plead with their fathers to get their husband off, but to no avail. Finally, the impresario of the opera, the Beggar, is prevailed upon to grant a reprieve.

The popularity of Britten’s three chamber operas proper (The Rape of Lucretia, Albert Herring and The Turn of the Screw) has tended to somewhat overshadow his brilliant adaptation of John Gay’s The Beggar’s Opera, the realisation of which was completed in 1948. Indeed, Britten’s harmonisations and arrangements of the pre-existing tunes, which he described as ‘among our finest national songs’, is so personal and idiosyncratic that the opera sounds like a totally original work. Despite the longish stretches of spoken dialogue, Britten brings all his usual techniques of dramatic characterisation to bear and binds the work together by effective use of leitmotif and meaningful key-schemes.

The scoring too is brilliantly imaginative with Britten varying the range and constitution of the orchestra almost from number to number. Dramatically too, the story chimes neatly with Britten’s preoccupations with the penultimate scene, where Macheath reflects on his fate in the condemned cell, remarkably foreshadowing the similar moment near the end of Britten’s next full-scale opera Billy Budd. 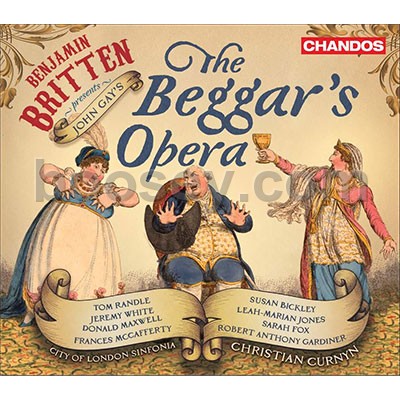