Emerging from darkness, the mythic world of Federico García Lorca comes into being. The sound of horses on the wind, the endless flow of the fountain of tears ("Ainadamar"), the trumpet call of wounded freedom, and the aspiration and determination that have been denied generation after generation echo across the hills.

Teatro Solís, Montevideo, Uruguay, April 1969. The voices of little girls sing the opening ballad of Lorca's play Mariana Pineda. The actress Margarita Xirgu looks back across 40 years since she gave the premiere of this daring play by a brilliant young author. In the last minutes of her life, she tries to convey to her brilliant young student Nuria the fire, the passion, and the hope of her generation that gave birth to the Spanish Republic. She flashes back to her first meeting with Lorca in a bar in Madrid.

Lorca tells her that the freedom in his play is not only political freedom, and sings a rhapsodic aria that opens the world of imagination, a world inspired by the sight of the statue of Mariana Pineda that he saw as a child in Granada. Mariana was martyred in 1831 for sewing a revolutionary flag and refusing to reveal the names of the revolutionary leaders, including her lover. Her lover deserted her, and she wrote a serenely composed final letter to her children explaining her need to die with dignity.

Margarita reflects on the parallel fates of Mariana and Federico. The reverie is shattered by the call of Ramón Ruiz Alonso, the Falangist who arrested and executed Lorca in August 1936.

The ballad of Mariana Pineda sounds again, taking Margarita back to the summer of 1936, the last time she saw Federico. The young Spanish Republic is under attack: the rising of the right wing generals has begun, there are daily strikes and massacres. Margarita’s theatre company is embarking on a tour of Cuba. She begs Federico to come. He decides to go home to Granada instead, to work on new plays and poetry.

No one knows the details of Lorca’s murder. Margarita has a vision of his final hour: the opportunist Ruiz Alonso arresting Lorca in Granada and leading him to the solitary place of execution, Ainadamar, the fountain of tears, together with a bullfighter and a teacher. The three of them are made to confess their sins. Then they are shot. 2137 people were murdered in Granada between 26 July 1936 and 1 March 1939. The death of Lorca was an early signal to the world.

For the third time we hear the ballad of Mariana Pineda. One more time the play is about to begin, the story retold for the generation of Margarita’s Latin American students. Margarita knows she is dying. She cannot make her entrance, others must go on. As her heart gives way, she tells Nuria that an actor lives for a moment, that the individual voice is silenced, but that the hope of a people will not die. The Fascists have ruled Spain for more than 30 years. Franco has never permitted Margarita Xirgu, the image of freedom, to set foot on Spanish soil. Margarita has kept the plays of Lorca alive in Latin America while they were forbidden in Spain.

The spirit of Lorca enters the room. He takes Margarita’s hand, and he takes Nuria’s hand. Together they enter a blazing sunset of delirious, visionary transformation. Margarita dies, offering her life to Mariana Pineda’s final lines: "I am freedom." Her courage, her clarity, and her humanity are passed on to Nuria, her students, and the generations that follow. She sings "I am the source, the fountain from which you drink." We drink deeply.

"[Ainadamar] is Golijov's masterpiece, destined to be among the great musical achievements of our time."
— Pierre Ruhe, Atlanta Journal-Constitution 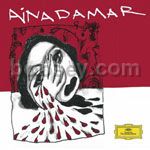 Click here to purchase this album from Deutsche Grammophon.