In the contest between fate, virtue, and amor, love retains the upper hand and degenerate virtue is defeated.

Otho bitterly confronts the ruins of his shattered love: in thrall to an uncontrollable passion, the Emperor Nero spends every night with Otho's erstwhile lover, Poppea, and in doing so is in danger of neglecting his duties as a ruler. Poppea feels she is sure to become an empress, but her nurse, Arnalta, urges her to caution.The nurse of the Empress Octavia advises her bitter mistress to avenge herself on Nero by also taking a lover, something Octavia firmly rejects. The moral suggestions put forward by the philosopher Seneca to the empress anger the servant Valleto. Nero also meets Seneca's admonitions with resistance. Poppea denounces Seneca to Nero, whereupon he orders Seneca's death. Otho confronts Poppea, and is brusquely rejected by her. He turns his attentions to Drusilla, who has long been hopelessly in love with him. Seneca is philosophising about death when he receives the emperor's order to commit suicide. He bids farewell to his students, then takes his own life.

Valletto and Damigella are enjoying the pleasures of their young love, while Poppea and Nero too indulge their passion lasciviously. But Octavia does not meekly submit to her fate: she forces Poppea's erstwhile lover Otho into the clandestine murder of her rival. Wearing Drusilla's clothes, Otho approaches the sleeping Poppea. But Amor foils the murderous plan; Otho flees, and the unsuspecting Drusilla is arrested in his place, and brutally questioned by Nero. For the sake of her love to Otho, she declares herself guilty, yet Otho himself explains the circumstances surrounding the attempted murder and reveals that Octavia is the source of the plot.Nero sentences Octavia, Otho, and Drusilla to the uncertain fate of banishment.

The way is finally clear for Poppea to be crowned empress. Arnalta already sees herself as the court's first lady in waiting. Now nothing stands in the way of the love between Nero and Poppea. 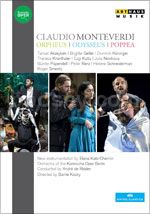