Seeing owes its nature to a series of seemingly disparate threads that came together in an almost serendipitous fashion. Commissioned for Emanuel Ax and the New York Philharmonic through funds generously provided by Lillian Barbash, Seeing was conceived from the start as something other than a traditional piano concerto. In early discussions with Emanuel Ax, I discovered that he had never publicly performed (and had no future plans to perform) the piano concerto of Robert Schumann, a work he deeply loved but which he felt, due to his extraordinary modesty, unable to do justice to. I immediately resolved to include snippets of the Schumann concerto in my score as something of a "private joke".

The next step in the work’s evolution came as I searched for a title that would betoken the piece’s somewhat free form. In the summer of 1997, while browsing through discs in my collection of rock music, I came across an album by the San Francisco band Moby Grape, a record to which I had not listened for some years. As Moby Grape ‘69 began to play, I perused the song titles on the jacket and was struck by the name of the final track, a song by one of the group’s guitarists, Skip Spence. The song was titled Seeing, and I was struck by the combination of simplicity and vision symbolised by this title. I had the name for my work.

Some months later I was browsing in a bookstore and came across a book detailing the current activities of various figures in the rock music world of the 1960s. As I came upon the Moby Grape entry, I discovered that Skip Spence had for some time been institutionalized as irretrievably psychotic, and this led me to reflect further upon Robert Schumann’s own institutionalization for psychosis. These strands now came together and my conception for the composition took form. How do the mentally ill "see"—not in the purely ocular sense but rather in the psychological and spiritual sense? How do they interpret what they see? And how can a representation of these "images" be translated into sound?

The result is a piece in four connected sections (fast-slow-fast-slow) lasting approximately twenty-eight minutes in which the Schumann concerto continually reasserts itself in a variety of guises, some easily identifiable and some distorted. Virtually all of the material in Seeing owes its genesis to the Schumann in some way, though often the metamorphoses of Schumann are so extreme as to be unrecognizable. The four sections of the work could be said to correspond in the most general way to the form of the standard concerto, though the large, slow movement is placed last, after an impassioned allegro, a disembodied and disoriented adagio intermezzo, and an hallucinatory scherzo. It is important for the listener to realize that Seeing is not a narratively programmatic piece. There is no "protagonist"—real or imagined—and no series of events is depicted in the music. Instead, it was my plan to explore the notion of "sanity" via swings back and forth between extremes of consonance and dissonance, stability and instability. My intent was to compose a unified and coherent work about confusion. Seeing does not "take a stand" upon mental illness as a social cause; rather, I wished to concern myself with the tragic toll such afflictions can take upon individual persons and those who care for them. 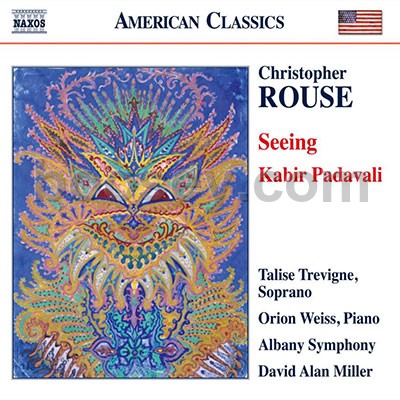