4 women's voices (2S.SM)
Ensemble should be balanced by electronic amplification

The text sung by the four voices discusses the ‘perfect line’. In the original book, a cross-figure is shown as two perpendicular lines: T


This is an example of a ‘perfect straight line’, according to the metaphysical theories of the author, Dr Schoenmaekers, who greatly influenced Mondrian’s thoughts.


A ‘boogie-woogie’ piano is placed on the left side at the back of the hall. At rehearsal fig.29 – or earlier, depending on the size of the hall – the dancer begins moving extremely from the piano towards the conductor. She walks backwards, ‘drawing out’ the laser beam with her outstretched arm.


She should reach the conductor at rehearsal fig.39 and four bars before 40, lowers her arm so that a gigantic laser-T (created means of small mirrors) suddenly appears above the audience. At that moment, completely unexpectedly, the boogie-woogie piano part begins. The dancer, taking a microphone, starts talking about her memories of Mondrian (see score).


The English version of the spoken text my be chosen, though the ‘exotic’ authentic Dutch of the writer, painter and composer is preferred.


It is very important that the same person ‘makes the T’ and speaks the text. Some spotlights should be used during the performance of the dancer/speaker.

“De Stijl is a snarling, clotted, brilliant piece of work...all musical lines are warped, twisting continually between the pure geometries of conceptual music and the abrupt graffiti of jazz.” Globe and Mail 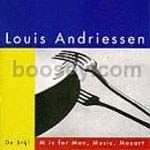