This was certainly no ordinary production of ‘Hamlet’. The avant-garde director and designer, Nikolai Akimov, wanted a scandalously modern production, not a tragedy but a darkly absurd satire. Everything in the show was back to front: Hamlet was fat and horrible, Ophelia was a tart and Claudius was weak and likeable.


To reflect this improbable vision Shostakovich wrote one of his very finest sequences of incidental music, a long, rich and mercurial score that flickers between laughter and outrageous pomposity, with echoes of Offenbach and cabaret music, and moments of surprising and genuine pathos. At the time when he was working on this piece, Shostakovich was also writing his opera ‘Lady Macbeth of the Mtsensk District’ and he used ‘Hamlet’ to try out many of the new dramatic ideas and devices that were going to be so important in his opera.


This is a fascinating and compelling piece that may either be performed complete, with voices singing and speaking Shakespeare’s lines, or as a brilliant orchestral suite, op.32a. 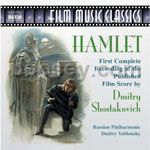