The piece Gestalt (literally "form", "figure" or "shape") makes up the second part of a cycle of three chamber music works whose first part is called Vergessenes Bild (Forgotten Picture); the conclusion is the piece entitles Geheimer Raum (Secret Room). In spite of abstract titles and the unspectacular subtitle "chamber sonata", the pieces are an experimental field for the composer. He has the opportunity here to try out new things with musical semantics, with phrasings, proportional relationships, and styles that open new possibilities for him in orchestral music and opera.
Especially in the recent past Glanert has been very much interested in dance and rhythmical pulse, and has occupied himself with the nature of metrical accents. Gestalt is a further experiment in this direction.
The formation of flute, clarinet, piano, percussion, violin, viola, cello, and double bass seems to him to offer the most possibilities within a small ensemble – the sound lets itself be stretched in height, breadth and depth like a muscle. Therefore, Glanert has decided to set all three pieces of the cycle for this formation.
The entire piece and its material circle around the central tone of c-sharp; it forms a chain of tones (not a series!) that is in a state of constant change, and reaches in this manner various shapes. The "tick-tick" of the wood block, particularly at the beginning and at the end, is not by chance; it was the composer’s intention to create an association with the notion of TIME. One can thus consider the piece to be a sound-time sculpture that turns slowly – in our inner eye – and allows perpetually new and varying insights into the unchangeable material.
Thomas Tangler

"Glanert has created a fascinating sculpture of space and time, from the ticking (apocalyptic?) time-measures of the woodblocks at the beginning and end to the small windows of longing for ‘beautiful old music’ and harsh shrieking and screaming moments. With its pulsating rhythms, the piece allows vegetative dance episodes (sometimes reminiscent of jazz) to unfold, while preserving moments of silence in the course of the work. Glanert makes moderate use of stylistic devices. He resists the temptation to waste the best moments too early. The structure is well-rounded, tension is created in economical portions. The core of the work, the Gestalt (figure/shape) of the title, remains a precious good." (Lutz Lesle, Das Orchester, Nov 1996) 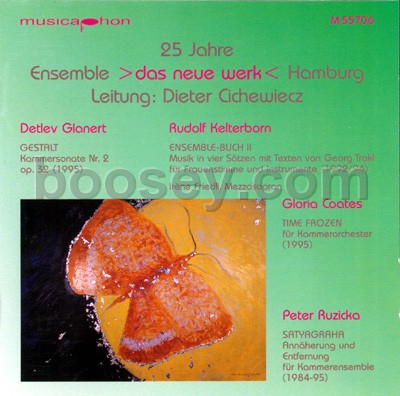