As I though about this score, I remembered the poem of the Jacobean poet, Richard Crashaw, Bulla (Bubble) in which a floating bubble is personified and thinks about earthly things, especially in this passage:

I am the glass of the blind goddess;
I am the die of fortune which she gives her soldiers;
I am the creed of fortune by which she confirms the tenuous faith of drunken
mortals and seals their documents.


Adagio Tenebroso was commissioned by the British Broadcasting Company to celebrate the 100th anniversary of the Promenade Concerts.  It is dedicated to the Proms and to Amira and Alexander Goehr.


It was composed during my 85th year mostly at Southbury, Connecticut.

Reproduction Rights:
This programme note can be reproduced free of charge in concert programmes with a credit to the composer

Adagio tenebroso is the first movement of the orchestral triptych Symphonia: sum fluxae pretium spei. A symphony beyond symphonies, this was an astoundingly and hearteningly massive achievement for a composer in his mid-eighties. The invention is consistently alert, the execution masterful and the development typically nimble. Thinking of a Latin poem by the seventeenth-century English poet Richard Crashaw, Carter adopts the viewpoint of a bubble floating above human affairs, observing, in the three movements, the games people play, the tragedies they endure, and the life that goes on fizzing through them. These movements may be performed separately and were separately commissioned, Partita by the Chicago Symphony, Adagio tenebroso by the BBC and Allegro scorrevole by the Cleveland Orchestra.


Reproduction Rights:
This programme note can be reproduced free of charge in concert programmes with a credit to the author. 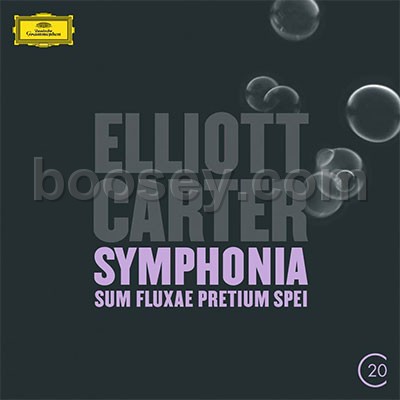