The English word ‘setting’ is used both in the sense of ‘stage setting’ and ‘sunset’. The image of a sunset, which symbolises the passing of time, is the imaginary scenery in which the six scenes of this quartet unfold like veiled stage settings that have something to hide.

By concealing the image, the viewer is forced to draw upon the memory of what has already been impressed on their minds. Something invisible and lost is imagined, thus uncovering – in contrast to the superficial contemplation of industrial reproductions – an inner meaning.

The titles of the six paintings quoted have one thing in common. They are all haloes of infirmity, symbols of the injured, failing body which nevertheless carries the paradox of something living and metaphysical unfolding. The body presents the allegory of a hidden, unfulfilled confidence that there will be consolation, a corridor of that which has not yet been, or – such as in Bacon’s images of Crucifixion – that which is no more.

The string quartet is placed within a dualist field of tension where the motivic elements shift between the foreground and background. In this field, they remain torn between surfacing and disappearing. There is also a core series of tempo proportions that are simultaneously accelerated and slowed down, intricately suspending each other, superimposing one another and providing the rhythmic foundation of the six movements.

This is most clearly audible in the second movement. A preview of the beginning of the third movement, a bicinium in Renaissance style, is embedded in a spiral-like structure. The development of the bicinium in turn covers the spiralling structure of the second movement. In the fourth movement there is a hidden fragment from the Symphonie Fantastique, worked into the text in the foreground. In the first and fifth movements, melodies and baroque ornaments are superimposed by themselves or ‘erased’ by noises. In the sixth movement, the core elements of the five previous movements appear as if in a time-lapse, united in the fall of the ‘Blind Leading the Blind’: not only as a case study of musical imagery but also as a fall into darkness, into the veiling of music itself. The music represents the forlornness of the blind glance which Brueghel’s characters direct towards heaven, and the faltering grope in the whirl of an overexposed world.

The quartet is dedicated to the sculptor Heinz-Günter Prager. 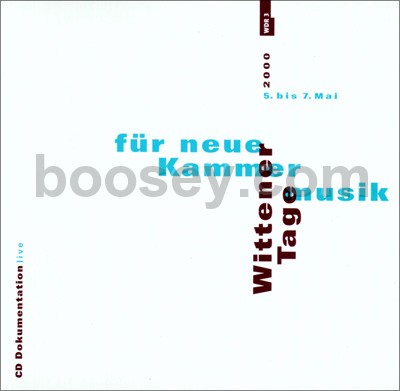