The bassoon is often regarded as rather grotesque in character, sometimes even earning the nickname of "clown of the orchestra". On the contrary, to me, this instrument has always seemed to possess tremendous untapped dramatic potential.

As I was about to start this work, I heard from my native Poland about the torture and murder by the secret police of the Catholic priest, Father Jerzy Popieluszko. I immediately decided to compose my concerto as a memorial to his martyrdom, to pay homage to this noble young man, who devoted his short life to upholding truth and love, preaching that "...we should be free from fear, intimidation, but above all from the desire for revenge or violence".

My Bassoon Concerto, scored for small orchestra, with flute, two clarinets and strings, consists of five contrasting movements, played continuously: Prologo - Recitativo I - Recitativo II - Aria - Epilogo. I chose these operatic-sounding titles partly in order to emphasize the underlying drama of the work, and partly because they indicate the parlando character of the recitatives, as well as the singing quality required of the bassoon in the Aria.

Although this concerto is an abstract work with no literary programme, the listeners, especially those with some knowledge of Father Jerzy Popieluszko's religious life and horrific death, might recognize in my music an echo — just an echo — of, say, the priest's patriotic sermon, his humble prayer, or even his last, fatal interrogation by the secret police before his tortured body was thrown into the reservoir by the Vistula river.

As regards the structure and musical language, the brief Prologo and Epilogo, both marked allegro con spirito, are organically similar, both based on one 3-note cell with its perpetual reflections and transpositions (a device that I have used in almost all my works composed since 1968).

Both Recitatives also include 3-note cells, but purely as the harmonic backgrounds providing contrast to the solo part. In the first, andante religioso, the melodic line played by the soloist is based on six notes of a minor scale. In the second, allegro drammatico, the solo part is based on two dominating intervals: a minor second, and a fourth. This same fourth is also the main interval featured in the Prologo and Epilogo.

The design of these Recitatives both contain a geometrical element. In Recitativo I, in contrast to the bassoon's descending melodic line, the harmonic background played by the woodwinds starts in the lowest register, ascending very gradually in a progression of long-held 3-note cells. In Recitativo II, the bassoon begins its melodic journey in its lowest register, gradually moving upwards. Meanwhile the harmonic background, played by the strings, moves downwards, from highest to lowest register, in a succession of abrupt chords made up from a distorted version of the 3-note cell in the previous movement.

The Aria (adagio laroentoso) is the central and most extended part of the Concerto. It is a kind of elegy, for which I composed a long melodic line in the spirit and character of Polish rustic music, perhaps evoking Father Jerzy's peasant origins. The intended climate of utter simplicity and directness of this song is broken twice by sections constructed with the 3-note cell musical material of the outer movements.

The reason that this composition ends with a short, dramatic Epilogo (allegro con spirito) rather than with a lament as in the Aria, is that I wanted to express musically the symbolic significance of Father Jerzy Popieluszko's martyrdom: I wished to positively assert my faith that, though his earthly frame had been captured and tortured to death, his spirit would live on indefinitely; and would unquenchably continue to influence the Polish people in their heroic struggle for truth and basic human rights.

For the diagram illustrating the construction of this work, see the programme note section on www.panufnik.com 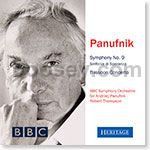