Sinfonia Elegiaca, my second symphony, is my anti-war protest against violence and the aggressive element in mankind, and is an expression of my deep anguish for all war victims of all nationalities, all religions and all races throughout the world. This symphony has no literary programme, though I composed the first version* of it while still deeply haunted by my personal loss of beloved family members and close friends, by the terror, deaths and deprivation we experienced in occupied Warsaw during World War II.

This symphony is designed as one continuous movement built in three parts: slow-fast-slow - like a triptych painted on a huge canvas. It has no literary programme, but emotionally it expresses sorrow for the victims of the war (molto andante), then protest against inhumanity, madness and violence (molto allegro) - coming back to the lament for the dead and the bereaved (molto andante) - thus emphasising that their agonising sacrifice brought neither peace to the world nor full freedom to countries such as my native Poland.

As regards the musical language, I chose to confine myself to direct and economic means of expression.

Sinfonia Elegiaca begins with a scarcely audible tremolo on the timpani, then 'cellos and double basses enter very softly with a chorale-like lament (Section A), followed by the solo cor anglais with song-like new thematic material (Section B). The lament (A) is then repeated by horns, and the song-like theme (B) by violins. The second, central part starts also with timpani solo, this time abrupt and with full force, announcing the rhythmic motto-motif on which this middle part is based. Constructed as a quasi-sonata: the first thematic thought, marcatissimo, is taken by the brass instruments and the contrasting, second one, cantabile, by the violins starting in a quiet, persuasive mood. This thematic material is repeated by tutti and the cellos respectively.

The third part of the symphony opens with new musical material of contemplative character, played by the string orchestra only (Section C), after which the woodwinds come in, returning to the chorale-like lament (Section A), then a long diminuendo brings the symphony to its conclusion on again a hardly audible timpani tremolo.

*The material of Sinfonia Elegiaca, Panufnik’s anti-war symphony, comes from the first two movements of his now extinct Symphony of Peace composed in 1951. For further detail, see www.panufnik.com 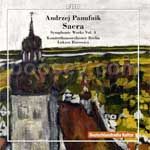