Libretto by Michael Symmons Roberts, based on a story from the Mabinogion (E)

A nation torn apart by civil war. The General (leader of one side) has arranged a marriage between his daughter Sian and Mal (leader of the other side) to try to end the bloodshed. Evan (General’s right-hand-man and Sian’s ex-lover) is bitterly against this. Evan tries – without success – to dissuade Sian. The night before the wedding Sian has an uneasy meeting with Mal in her hotel room. He wants some declaration of love or desire, but for Sian this is necessity, duty. Sian’s sister Megan is anxious and against marriage too. The wedding takes place in a once grand war-damaged hotel. At the wedding reception General and Mal make speeches, but old enmities and jealousies resurface and erupt into violence.

It is seven years later, and the eve of the investiture of Sian and Mal’s elder son Gwyn as leader of a unified nation, but peace is still fragile. Mal is furious that Evan is invited to the investiture, and in a row with Sian he hits her. The marriage – already in crisis – is over. Evan tries to seduce Sian again, and she is tempted, but holds out for the sake of Gwyn’s investiture and the prospect of lasting peace. The investiture is marked by a big party. Mal makes an emotional speech about his son, and attempts a public gesture of reconciliation and healing, but this again erupts into violence.

The two sides are at loggerheads again. All hope of peace is lost. General pleads with Sian to forgive him for trying to engineer peace through her marriage, and for the disastrous consequences of that. Sian cannot forgive him. General is desperate. What now can break the cycle of violence? He hatches a plot to try to break the deadlock, but there is a heavy price. One final act of violence, this time engineered by the General. Now, Sian pleads for a final end to the blood feud. Elis (Sian and Mal’s younger son) is brought in as the new figurehead, a last throw at a peaceful future.

"The Sacrifice offers as many thrills as Tosca, as much agony as Peter Grimes, more violence than Elektra and Salome combined and a suspense quotient to rival Lady Macbeth of Mtsensk. MacMillan's expertly crafted music has easy-to-identify theme tunes and gut-wrenching climaxes, with a closing tableau of which Verdi himself would have been proud... Michael Symmons Roberts has furnished an excellent libretto, built in half-rhymed couplets that leave acres of space for the music. MacMillan sets the words gratefully, with a central duet for soprano and baritone ("Your heart is my homeland") that is more beautiful than anything in modern opera."
Financial Times

"Here is something rare, a new opera with instant appeal... Michael Symmons Roberts' libretto is verbally crisp and narratively lucid - even without surtitles it would be easy to grasp the basics. MacMillan's score respects the text and is refreshingly well written for the voice."
Daily Telegraph


"...a score of real brilliance... His trump card is that he knows how to write for the voice, and – no less vital – how to accompany it; his ear for balance and texture is superb, and there are many pages in The Sacrifice that were plainly being sung with delight – I'm thinking of the passionate Act II duet for the daughter and her discarded lover, and the delicately ornate soprano aria at the very end, a gem... He uses uncomplicated ingredients – simple chords, long, eloquent string lines – working them into dense combinations or leaving them open. He has great sustaining powers; his polyphonies really work through and take the ear with them."
The Independent


"...the applause at the end was as warm as any I've heard for a new commission. For MacMillan has created a modern opera for people who dislike modern opera... Few operas enjoy premieres as well-executed as this."
Independent on Sunday


"...there are wonderful passages: a ravishing love duet underpinned by gorgeously folksy orchestration; Verdi-like declamations for the warlords; a choral threnody that summons the anguished modes of Eastern Europe to haunting effect; and a breathtakingly sonorous choral finale."
The Times 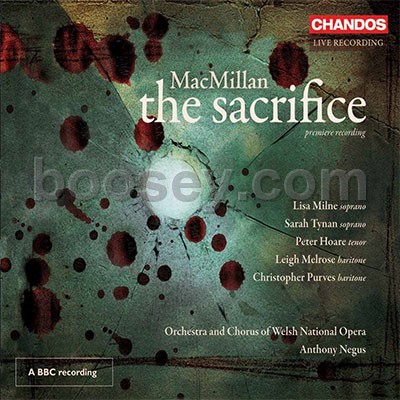