Sparta and Nauplia before the Trojan war

Prince Paris, having given the first prize of a beauty contest on Mount Ida to the goddess Venus ahead of Juno and Minerva, has been promised the most beautiful woman of Greece as a reward from Venus. This news has made its way to Troy where Helena, the wife of King Menelaus, is convinced that this woman must be no-one other than herself. Shortly afterwards, Paris appears in Troy, dressed as a shepherd, and asks the high priest Calchas for help in conquering the city. Paris wins at a ceremonial (though ananchronistic) guessing game, at which numerous classical heroes are gathered, and reveals his identity. Helena expresses her delight with daring coloratura. Calchas makes the thunder machine rumble and declares that Jupiter wishes the instant departure of the king to Crete. Menelaus has evil forebodings, but may not resist the will of the highest god. Paris is free to do what he wants. Now, however, as all obstructions have been removed, Helena appears cold and rejects Paris at night. Soon she repents what she has done and wishes for the fulfilment of her longings, at least in a dream. When that finally comes true, in a very real way, Menelaus returns and enters the marital bedchamber. This time Paris has to withdraw. Helena reproaches her husband for acting against the explicit will of the goddess Venus, and Menelaus begins to wonder whether she may be right. He sends for a priest of Venus from the island of Cythera who is supposed to investigate the case. But the priest, who takes Helena to his ship and abducts her "on behalf of the goddess", is none other than the cunning Paris. The Trojan war can begin, just as described in the schoolbooks… 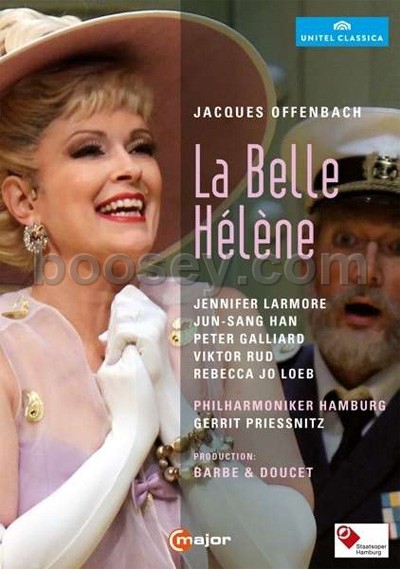