As workers arrive at the Brooklyn Navy Yard, three sailors – Gabey, Ozzie, and Chip – begin their 24-hour shore leave in Manhattan. On the subway ride into town, Gabey sees a poster of Ivy Smith, the winner of the June "Miss Turnstiles" contest, and immediately falls in love. The three sailors hatch a plan to try and find her, but Gabey tries to remove the poster from the wall. A policeman chases them, and the three men become separated. Chip is whisked away by a cab driver, Brunhilde (Hildy) Esterhazy, and Claire de Loone, an anthropologist at the Museum of Natural History, picks up Ozzie. Feeling lonely and sad, Gabey takes a walk through Central Park. He eventually finds Ivy Smith in a voice lesson with her teacher, Maude P. Dilly, at a studio in Carnegie Hall. Ivy agrees to meet him in Times Square at 11 P.M., and continues with her lesson. Gabey feels elated until Mme. Dilly shows up at 11 o’clock instead of Ivy, and informs him that Ivy has decided to work that night instead of seeing him. At that moment, Chip, Hildy, Ozzie, and Claire all return to take Gabey out club hopping in an attempt to cheer him up. Hildy tries to console Gabey by promising to fix him up with her roommate, Lucy Schmeeler. While out on the town, the group encounters Mme. Dilly at a club. Gabey finds out that Ivy is working on Coney Island, and the group sets off to find her. They arrive at Coney Island and discover Ivy working as a cooch dancer, and she and Gabey are finally together. Before the revelers can head out for more fun, however, they are caught by the police and arrested. After spending the night in jail, the three sailors return the next morning to their ship at the navy yard, and three more sailors set off for the city in search of adventure. 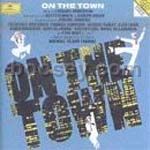