The Male and Female Chorus describe the historical background to the story, and reveal their view of events to be that of a later, Christian era. The action is set in and around Rome immediately before the end of the reign of the Etruscan king Tarquinius Superbus in 510 BC. At a military camp outside the city his son, the prince Tarquinius Sextus, is drinking with two generals, Collatinus and Junius. They discuss an earlier, unfortunate bet, in which the constancy of various Roman wives was tried and found wanting. Of the married men (Tarquinius goes to brothels) only Collatinus can boast a wife, Lucretia, who was discovered sleeping alone in her husband's absence. Urged on by the malicious Junius, Tarquinius decides to prove Lucretia chaste by attempting her virtue himself, and rides off to Rome.

There his arrival at her house produces consternation, but hospitality forces Lucretia to offer him a room for the night, despite her misgivings and those of her servants. Tarquinius's purpose, however, is made clear when he wakes her and forces himself upon her before leaving her house. The following morning her late appearance in a distressed, broken state is only slowly understood by her nurse Bianca and maid Lucia, and her husband is sent for. Collatinus arrives with Junius to hear the news, and despite his at least partial understanding of Lucretia's shame it is too painful for her to bear, and she stabs herself. Her death provides the impetus for the Romans to throw out the Tarquins. The Male and Female Chorus attempt to come to terms with these events in a Christian context. 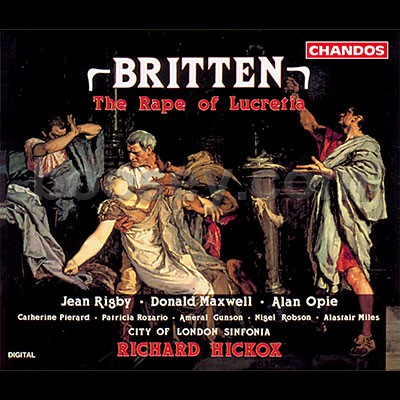