Libretto by the composer, from recorded interviews with war veterans (E)

Territory
This work is available from Boosey & Hawkes for the world.
Roles
Synopsis

Soldier Songs contrasts the perceptions and realities of a soldier from the age of six through sixty-six. Based on interviews with veterans, and the culmination of 9 years of work by composer David T. Little, Soldier Songs is constructed in three sections: Child, Warrior, and Elder, yet the movements flow seamlessly from start to finish.

CHILD
A boy first encounters war through toys and games, playing with action figures available with an arsenal of accessories. As he grows, video games replace these dolls. These games offer an immersive, combat-like experience in which the player kills countless "enemies," and where the only consequence of the player’s death is a brief wait while the game reloads. As the boy becomes a young adult, the game becomes more real. He registers for the draft at age eighteen. Reflecting on the highly randomized selective service process from the Vietnam War, he counts each day with a passing dread at the thought of combat. Once deployed, he counts the days again, but differently: down from 365, hoping he makes it to one.

WARRIOR
The boy is now a modern-day soldier. As technology has changed the tools and language of war, it has also changed the experience of combat. The soldier creates his own soundtrack: piping heavy metal into ear buds, he recreates the feeling of the video game, shooting abstract enemies that appear as pixels on a screen. But the game becomes too real, and the brutality of war sets in. Images of death, destruction and killing that may have been exciting in action movies back home, now play out with horror before his eyes. He seeks refuge from incoming ordinance; an unbearable experience that he knows will stay with him for the rest of his life.

ELDER
The stories diverge. Veterans reflect on their experiences in combat, or discuss the challenges of reintegration into civilian life. One man reflects on the futility of an endless war. Another confronts the bereavement team sent to notify him of his son’s death in combat. The opera concludes with recorded interviews—the composer’s family and friends: the soldiers who inspired this work—as our soldier opens his mouth to tell his story.

“Mr. Little’s gifts for setting text comfortably and effectively, and for writing music informed by Minimalism and rock but slavishly indebted to neither, are evident throughout the briskly paced work. …The presentation provided further evidence of Mr. Little’s fast-rising stock as a vital theatrical creator.”
—New York Times


“[Little] has earned acclaim for the imaginative way he draws on his varied musical interests to produce arresting and coherent works. Soldier Songs, for which Little wrote his own libretto, sustains that reputation.”
—Musical America

In 2004 I was invited to a career day at my former high school to speak with students about being a composer. I shared the stage with an old friend, Justen Bennett, who had just returned from Iraq, where he had been a field medic and had been among those who stormed Saddam Hussein’s palace. The contrast between Justen’s job and mine was striking.

Exiting the auditorium I saw a display case, which I remembered the school using to celebrate student achievements: a victory for the football team or marching band, or photos from the musical that had happened the previous week. Now it showed photos of soldiers: alumni currently serving in Iraq and Afghanistan, driving tanks and carrying machine guns. Here, in the same case where their prom photos might have been only a few years prior.

I remembered our days together in class, debating the ethics of Vietnam or the Gulf War. I reflected upon my attitude at the time: the simplistic view of an adolescent, that war was always wrong. I just didn’t understand why someone would enlist. But here, a decade later, my friends were defusing land mines in Iraq.

I considered my own family. My generation was the first in nearly a century not to serve in the military. My uncles were in Vietnam, Cambodia, and Laos. My grandfathers were both in World War II, and my great-grandfather was in WWI. My third great-grandfather was killed in Tennessee fighting for the Union. In a way, I had descended from this thing I had previously dismissed. Cracks began to form in my absolutist position, and questions began to arise.

To find my own answers, I called family and friends who had served—and who were not on active duty at the time—and asked them to speak with me about their experience. It was from their stories that Soldier Songs began to emerge. Our recorded conversations feature prominently both as the basis for the libretto, and in the electronic component of the score.

What struck me most was that, in nearly every conversation, it was the first time the veterans had shared their experience, even though some had left active duty decades ago. "I’ve never talked about this with anybody" became a common refrain. This became central to the piece—what, for me, this piece is about: the difficulty or impossibility of the telling.

I am often asked if Soldier Songs is an anti-war piece, but it’s not that simple. I never intended for it to prove a point, or even to deliver a specific message. I selected and edited these conversations more as a way of sharing than as a way of convincing. I hope that Soldier Songs conveys what I gained by writing it: recognition of the soldier’s plight and a due measure of compassion. 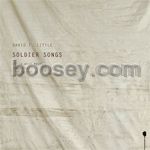