In the Bible, Abraham buys a cave from Ephron the Hittite as a burial place for his wife Sarah. The Cave of the Patriarchs, as it has come to be known, became the final resting place not only for Sarah, but for Abraham and their descendants as well. In Jewish mystical sources the cave is also a passageway back to the Garden of Eden. It is said that Adam and Eve are buried there.

The cave is of great religious significance for Moslems as well. While the Jews are descendants of Abraham and Sarah throught their son Isaac, the Moslems trace their lineage to Abraham through his son Ishmael born to Hagar, Sarah's handmaid.

Today the cave, located in the largely Arab town of Hebron, in the West Bank, is completely built over and inaccessible. The ancient structures built above it reveal a long history of conflicting claims. One discovers not only the wall Herod erected around the cave, but also the remains of a Byzantine church, and finally the mosque built in the 12th century which has dominated the site ever since. Since 1967 the mosque built above the cave remains under Moslem jurisdiction, while the Israeli army maintains a presence at the site. Though tensions run particularly high, the site remains unique as the only place on earth where Jews and Moslems both worship. 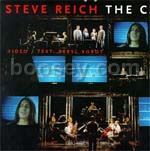