At a royal tournament the ambitious Earl of Essex picks a fight with Lord Mountjoy and is wounded. Queen Elizabeth's punishment is that henceforth they shall always attend court together. They become friends. Cecil warns his monarch about Essex's unruliness, and about the likely threat of an Armada from Spain. Working on her fondness for him, Essex flatters the queen and asks to be appointed her Deputy in Ireland, to quell the rebel Tyrone. Elizabeth temporises, conscious of her position as monarch and wary of his impetuousness.

In Norwich the Queen is welcomed by the citizens and entertained with a masque of Time and Concord. At Essex's London house, the Earl, his sister Lady Rich and her lover Mountjoy plan their advancement to power: his wife counsels caution. At court the Queen insists the ladies change after a strenuous dance; she reappears wearing the gaudy dress of Essex's wife, shaming her. Essex is furious, but mollified when Elizabeth announces the appointment he has long urged and sends him to Ireland.

His campaign, however, is a failure, and on his sudden return he insists on admittance to the monarch while she dresses: he finds her an old woman without wig or make-up. He pleads his cause, but she is unconvinced and later Cecil warns her of his scheme to replace her. In London, Essex's supporters fail in their attempt to win the people over to his rebellion. Essex is condemned, and a deputation of his wife, sister and friend does not save him. Elizabeth signs the warrant for his execution. In the final scene, the dying monarch recalls the tests she has withstood during her reign. 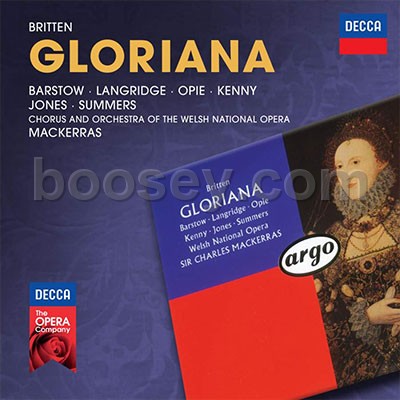