The title Sinfonia Mistica reflects my deep fascination with the mystery and beauty of geometry; referring in this composition specifically to one figure which for me personally is a symbol of universal order and inner harmony. This figure illustrates the curious fact that it take SIX circles precisely equal in size to fully encircle a seventh circle of the same size: not five or seven but SIX. Perhaps this could be explained simply by mathematical formulae, but for me this geometric figure instils a sense of wonder and seems to have some mystical significance.

Although the structure and musical material of this symphony are influenced by this geometric figure, my idea in composing this work was not limited to just a realisation of a purely technical concept. Rather I wanted to convey to listeners some spiritual content, some contemplative and hidden messages by means of a meticulously structured framework, through which also I was trying to transcend the existing methods of composition. (My personal approach to mysticism has no connection with the mysticism of any specific religion: neither with Western doctrines nor any religious philosophies of the Far East.)

The SIX circles of this curious geometric figure imposed up me the number SIX. This number I regard as having a twofold significance, a hidden power as well as its unique arithmetic properties: 1+2+3= 6; 3x2=6 (2+2+2=6); 2x3=6 (3+3=6). One plus two plus three gave me the triads for my melodic and harmonic devices, while three twos and two threes gave me the meter for the whole composition.

Thus every aspect of my Sinfonia Mistica is strictly relation to this number: the whole works consists of SIX substantial sections, based on SIX triads, SIX melodic patterns, SIX harmonic combinations, composed in the meter of SIX (and it happens to be my SIXth symphony). With these SIXes, I endeavoured to use the law of geometrical proportion to provide structural binding forces through the elements of ’geometric’ melody, ‘geometric’ harmony and ‘geometric’ rhythm and meter. 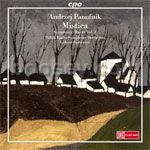