<dir=ltr align=left>Composed specifically for Svyatoslav Knushevitsky, a cellist who played regularly with David Oistrakh and Lev Oborin (who had given the first public performance of Khachaturian’s Piano Concerto), this is a darker work than even the Violin Concerto. Indeed, the opening orchestral tutti is almost a howl, before a more beseeching second idea is introduced by high strings, after which the soloist, in contrast, enters with an almost Mendelssohnian theme. Even more lyrical is the cello’s main theme in the central movement, though this is introduced by one of the most eerie and sinister orchestral introductions Khachaturian ever composed. In the finale, the cellist is spurred to virtuosic figuration which was to be echoed less than five years later in Prokofiev’s landmark Symphony-Concerto. Khachaturian was to be officially reprimanded for writing such an emotionally dark work, whose recognition as possibly the most profoundly expressive of his three concertos is long overdue. 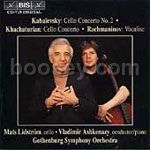