This piece was composed between May and September 1984. Although the orchestration was adapted to meet the conditions of the Forum organized by the GEMA from the very beginning, the plan for the work was actually made much earlier. The Berlin Philharmonic Orchestra then decided to perform the premier of the piece.

“Why a symphony?” The starting point of the composition was the fascination with shapes and conditions that are considered typical of symphonic style. An upbeat, a climax, a recollection, certain figures – all those instant associations that spring to mind on hearing the word symphony, formed the basic material of the composition. It is therefore not a proper symphony but an orchestral piece about symphonies, bearing the title Symphony.

The single movement is a blurred recollection of the old, three-part symphonic form; the closing section, in contrast to the sonata form, develops an increasing polarisation, resulting in the existence of two closes that are played in immediate succession. By breaking apart in this way, the music opens the piece towards the future: towards nothing.

At the beginning and end the noise of a wind machine can be heard; at the end, it is accompanied by a viola da gamba and a guitar: the historical elements are blended beyond recognition.

In the centre of the movement, there is a section for solo cellos and solo violas; this section in turn centres around a small quotation from Mahler: this is not only a tribute to the symphonic master but also the consequence and cause of the previous music and of that which is still to come.
Thomas Tangler

"The reason why Detlev Glanert’s first symphony is so difficult to describe is that it avoids the clichés that can be learned and reproduced – those that all critics have in store. A new espressivo can be felt here, with extraordinary clarity and without sweetness... A 25-year-old composer creates a one-movement piece full of insistent, suggestive power, impressive as a result of its inventive use of new stylistic devices. What is heard is instantly convincing , though it is impossible to predict. A musical language can be felt, but it has to be learned like a mother tongue. That, however, requires a second listening. Which should be feasible." (Diether de la Motte, Musica, Jan 1986) 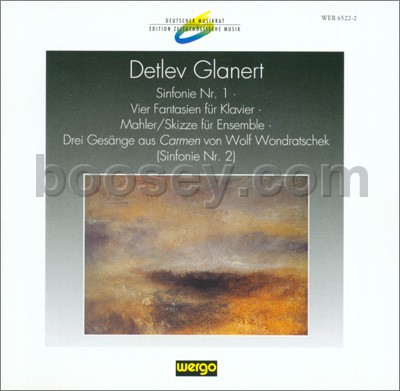