Early in the 1970's my colleague Gerald Fromme, who is principal solo timpanist in the Austrian Radio Symphony Orchestra (ORF) suggested I write a concerto for him. The request fascinated me, but raised fundamental questions to which I had no immediate answer. One of the aspects of the dissolution of the 'tonal' system was the emancipation of rhythm and the consequent liberation of the percussion from its largely subordinate or even menial tasks. While on the one hand I welcomed this liberation, on the other I have always found that tonality is for me an indispensable means of expression.

Since my soloist would, by definition, have to have a decisive role in the development of themes, I was drawn to Alban Berg's idea of 'Hauptrhyhmus' ('Leading rhythm'). The soloist would take command by a series of signals, based on rhythmic ideas and embracing metrical and formal structures, while the orchestra would form a kind of echo-chamber for developing the percussionist's material in intervallic and harmonic terms. But how was the interaction of soloist and orchestra to be defined, if not in terms of the concerto ideals of the past? The question continued to puzzle me for several years.

In 1981 the Austrian Radio, without knowing of our discussions, commissioned me to write a concerto for Fromme. Before I could start on it I had to write an orchestral piece, to which, on its completion, I gave the title Charivari. Curious about the origins of a word generally associated with the Parisian magazine in which Doré, Daumier and others satirised the Second Empire, I turned to the dictionaries and was astonished to discover that the medieval ritual to which it referred involved primitive forms of percussion. As a means of venting their disapproval on individuals who stepped out of line (generally out of the marital line) villagers would 'serenade' the hapless sinner at midnight by banging pan lids, crashing tin trays, rattling bottles and even pulling the tails of cats which protruded from specially constructed boxes. The French exported Charivari to Canada and Louisiana, where it became known as 'Shivaree'; the Basques knew it as 'Toberac' (like Charivari an onomatopoeic word) and the English as 'Rough Music' or 'Skimmity riding'; while the Germans - who shared the French taste for tormenting cats - called it ‘Katzenmusik'. In parts of France, notably the Périgord, the custom was so firmly rooted that it survived into the first half of our own century - a century which has, of course, evolved immeasurably more effective means of expressing society's disapproval of outsiders. Particularly relevant in this context is the Bavarian ritual which, in its still harmless form, was known as 'Haberfeldtreiben'.

What this deep-rooted custom seemed to offer was not an excuse for folkloric exploration, but a dramatic and formal basis for the concerto as concerto. The heterogeneous sound elements - tuned and untuned, aggressive and moderating - that are marshalled together by the demagogic 'drummer' represent in the first place a concentration of forces which gradually find their allies and fellow-travellers in the orchestra. This image becomes, by extension, an expression of a mass movement whose participants, from a variety of contradictory motives, have surrendered their individuality to a questionable leadership.

The first movement, 'Toberac' is the simplest of the three, structurally, expressively, and instrumentally. The solo part begins with the 'Hauptrhythmus' and is restricted to two melody instruments – xylophone and marimba.

In the second movement, 'Shivaree', the untuned percussion takes over, and is doubled by the orchestra, whose harmonic structures eventually give rise to the vibraphone's lyrical answer. Although there are no specifically American allusions in this movement just as there are no Basque ones in its predecessor the violence of its developments may serve as a reminder that the 'innocent' revelry of Shivaree was not without relevance to the latter-day processions of the Ku Klux Klan.

While the first two movements may be heard as abstract manoeuvres, the third is concrete and specific. The subtitle 'for Henri Sauguet, at the tomb of Mister the Poor Man' refers not only to the doyen of French composers - who was born in Bordeaux in 1901 - and to his mentor, Erik Satie, but to an aesthetic implicitly opposed to all forms of violence, whether physical or spiritual. From the 'white' harmonies of the opening music there gradually emerges a ghostly outline of Satie's waltz-song ‘Je te veux'. Its untroubled mood and its purely formal implications govern the ensuing music and eventually allow for a second allusion - this time, to the waltz from Sauguet's ballet Les Forains. Rejoinders from the orchestra and from the soloist's arsenal become ever louder and more brutal until finally the two melodies are silenced ... and yet the echoes from them linger on, in the whiteness of their peaceable harmony.

"In an era when the percussion concerto has come of age, it is surprising Rough Music has not achieved greater prominence, as it has few equals for subtlely and resourcefulness... From the blithely detached Toberac, through the engaging interplay of vibes and kit-percussion in the exuberance of Shivaree, to the emotional immediacy of Charivari, this is music pleasureable without excluding deeper connotations."
Gramophone 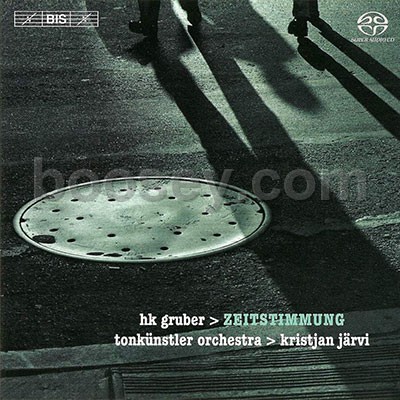