after the 9 psalms: O Ye Tongues form The Death Notebooks by Anne Sexton

DISINTEGRATION OF VALUES
The decision to write a requiem in response to the commission of the Festival d’Automne did not come as a surprise. The real surprise is the follow-through. 15 instrumentalists (some of them equipped with sophisticated electronic devices) and three singers are committedly exposed to the wildest disintegration of values in this century. The composers, grave-diggers of a culture focussed on individual works, maintain only one element of music: its manifestation through vibrations (waves?), hardly modulated, without an (ordering) system, completely released. Vibration (?) of a funeral march, played by two trombones (original by Mozart) over a nightmarishly pulsating tutti; vibrations of horror (made up of sounds that resemble a crowd of evil spirits); vibrations of religious distortions (a synthesiser with the qualities of a harmonium).
Conflict-ridden from beginning to end – you will have noticed by now – this is not a requiem that will help your soul find peace. However, it provides some moral consolation, in a situation where contemporary music is increasingly challenged by the absence of any frame of reference for language.
(Pierre Gervasoni, Le Monde, 18 October 1998) 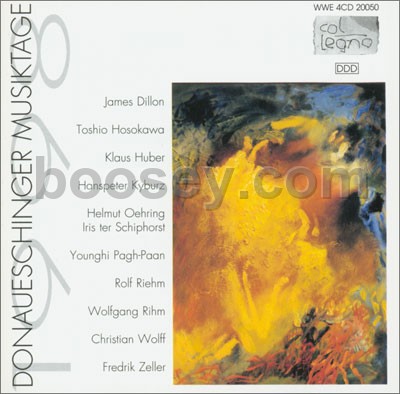