Sun-dogs is a setting of a poem by Michael Symmons Roberts. The text is richly allegorical, iconographic with a deep well of symbolism. The metaphors are complex, evoking a range of emotions and images, dark and terrifying one minute, radiant and ecstatic the next. I have divided the poem into five movements for large unaccompanied choir.

1. ‘I first saw them’ is generally slow and sombre but introduces the image of the dogs, racing at speed, intent on a kill. This is represented by a free and fast delivery of the text in certain parts of the choir, counterpointing with the narrator’s voice.

3. ‘I saw them leading’ introduces the interpolated text of a related medieval folk-song to set the scene, whispered by the men. This is the fast movement and I try to communicate the energy as well as the majesty and mystery of the animals, with their violence and dreams.

4. ‘Sometimes, like Tobias’. There seems to be a sensuous and bestial eucharistic scene evoked in these words. This is the serene core of the piece – glossolalia- type chanting of the latin prayer of consecration, framed by whistling and the deep breathing of sleep.

5. ‘ If you turn down the offerings’ begins with a full-throated recapitulation of the opening idea, before drifting into more mysterious territory with much free, soloistic texture and hazy memories of ‘Domini canes’.

Sun-Dogs is a major concert work in five movements lasting some 18 minutes. It is certainly not for the faint-hearted and needs not only a choir of extensive resources but a conductor with confidence and ability. The singers are divided into a main choir and a chamber choir. There are multiple solos and a group of whistlers in the last two movements who have an important role (the effect feels similar to that in Britten’s Spring Symphony at first). The music involves singing in free rhythm often within an overall pulse structure. In the 4th movement (a strongly effective and affecting movement), however, the free Latin chanting is continuous under a chamber choir singing harmonised chant and whistlers whistling metrically. The fade-out at the end of the work has to be carefully managed as some twelve soloists (MacMillan does not state an exact number) freely wind down using a familiar melismatic, ornamented figure, and the whistlers use an echo of the music they had sung in the previous movement.

MacMillan sets a remarkable and highly unusual text where feral ‘sun’ dogs become the unlikely metaphor for outcasts whose bread ‘part chewed with soft saliva’, and punctured orange, ‘sweet spittle matting on the soft hair round its muzzle’ become our ‘manna’ and ‘nectar’. Another powerfully religious message made more powerful by its unlikely subject matter. This is an inspired work well worth the effort of surmounting its challenges by a skilful and ambitious choir.

“The music itself was a revelation: a mesmeric blending of traditional and contemporary elements… a choral array of chanting and whispering, of shouting and speaking, of whistling and controlling disparate lines so that they wondrously merged… The co-creator of Sun-Dogs was British poet Michael Symmons Roberts who addresses theological and mythical symbolisms. Dogs, beggars, suns and stars turn into metaphors… The whole settled upon the ears like magic…”
Indiana Herald-Times 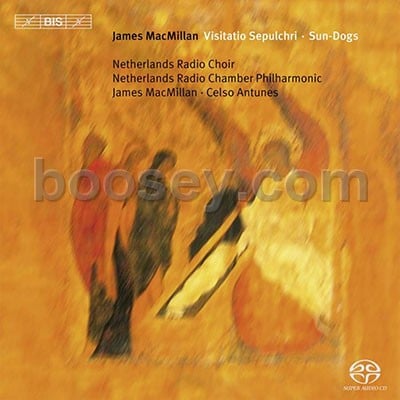