I wrote De Staat (The Republic) as a contribution to the debate about the relation of music to politics. Many composers view the act of composing as, somehow, above social conditioning. I contest that. How you arrange your musical material, the techniques you use and the instruments you score for, are largely determined by your own social circumstances and listening experience, and the availability of financial support. I do agree, though, that abstract musical material - pitch, duration and rhythm - are beyond social conditioning: it is found in nature. However, the moment the musical material is ordered it becomes culture and hence a social entity.


I have used passages from Plato to illustrate these points. His text is politically controversial, if not downright negative: everyone can see the absurdity of Plato's statement that the mixolydian mode should be banned as it would have a damaging influence on the development of character.


My second reason for writing De Staat is a direct contradiction of the first: I deplore the fact that Plato was wrong. If only it were true that musical innovation could change the laws of the State!


Reproduction Rights:
This programme note may be reproduced free of charge in concert programmes with a credit to the composer. 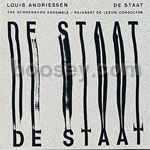