Since each of the movements focuses on one or two of the orchestral sections, one might be tempted to thing of it as a concerto for orchestra. However, the focus here is on the interlocking of voices within the sections rather than displaying their virtuosity against the rest of the orchestra. Those familiar with other pieces of mine will recognise this interlocking of similar instruments to produce a contrapuntal web filled with resulting melodic patterns.


In contrast to all other pieces of mine, The Four Sections begins slowly and gradually increases tempo as it goes along. The first movement begins in the first violins in three part canon joined shortly by the second violins and then violas, also divided in three canonic parts. The cellos joined by the woodwinds then bring out some of the melodies resulting from this nine-voice canon. Below and all around this the brass, synthesisers, and double basses add long-held chords.


After approximately ten minutes the second movement begins abruptly with two vibraphones, two pianos, and two bass drums. Although the tempo remains slow, the bass drum and piano accents against the two interlocking vibraphones create an extremely angular and irregular percussive music in sharp contrast to the first movement.


The third movement begins somewhat faster using the triplet rhythm at the end of the preceding movement as its eighth note. As mentioned earlier each movement is divided into four harmonic sections and in this movement each of these sections is devoted to a different instrumental grouping. The first is a trio for interlocking oboes with resulting patterns played by flutes and two solo violins, and with pulsing chords from the other woodwinds and horns. The second is centred around a trio of smoothly interlocking clarinets while the fourth section with the old quarter note equalling the new dotted quaver. Here a double trio of flutes and clarinets is harmonized by the full string section while trumpets and oboes play resulting patterns.


The fourth movement begins abruptly with the vibraphones, marimbas, and pianos at a fast temp arrived at by shifting the basic meter from a dotted quaver note to a quarter note. The second violins, violas, and vibraphones gradually construct a rapid repeating pattern while at the same time a high melody is built up, a note at a time, in the first violins and winds. Suddenly, the pianos, bass drums, basses, and cellos begin adding low accents to re-interpret the metric stress. When this orchestral build-up is completed it then modulates through the four harmonies mentioned earlier, changing metrical accent and melodic shape as it goes. Finally the full ensemble cadences on F#. The total duration of the piece is about 25 minutes. 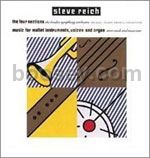