A year by year alignment of Isang Yun's life. Biographical information by Walter-Wolfgang Sparrer, based on an exhibition at the Yun House Berlin, 2011/12. The chronological list of selected works provides links for further information on those published by Boosey & Hawkes | Bote & Bock.

17 Sep: Isang Yun is born in Kyongsangnamdo Province in Korea as son of poet Ki-Hyon Yun and a peasant's daughter. His father owned a small fishery and a carpentry in the seaport town of Tongyeong. 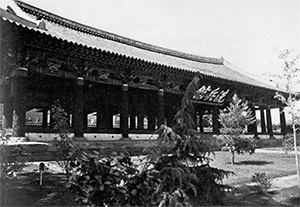 An interlude at a cinema in Tongyeong sees the first public performance of a work by Yun, then a self-taught composer.

Prints the Korean song collection Mokdong ui norae (Shepherd’s Song) at his own expense, driven by his desire to build and strengthen Korean identity and national consciousness.

1935/36: Studies at Osaka College of Music (cello, music theory) against his father’s will. In Osaka, Yun adopts a Japanese name. When his Korean identity is disclosed, he escapes to Seoul, where he is christened as Protestant on 8 November 1936.

April 1937-March 1940: Teaches at a private primary school in Tongyeong.


Returns to Busan, Korea after hearing rumours about the imminent outbreak of the Pacific War.

Forced by the Japanese occupying forces to do fatigue duty and to exact ‘strategic’ dues from peasants in the Tongyeong area.


P
ersecuted again by the Japanese military police. Escapes to Seoul, where he hides under a false name.

Falls ill with tuberculosis, taken to university clinic in Seoul.

15 Aug: End of World War II. Korea is liberated from 40 years of Japanese rule. Heralding the onset of the Cold War, the Great Powers, the Soviet Union and the USA, secure their spheres of influence by occupying Korea. 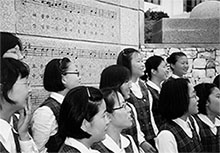 1946/47: Founds and directs a municipal orphanage in Busan, Korea.

May 1947-Feb 1948: Returns to girls' grammar school in Tongyeong to teach music again.

30 Jan: Marries Sooja Lee. Together, they take a flat in Busan. 20 Nov: Daughter Djong is born.

25 June: Tensions between North and South Korea lead to the Korean War.

27 July: Armistice and end of the Korean War sealing the country’s division. Seoul becomes seat of government again, albeit for South Korea only. 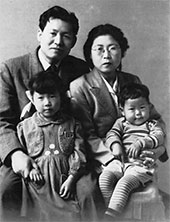 1953-1956: Teaches at various universities in Seoul. Participates in the setup of musical life in general.


Studies at the Berlin College of Music
under Boris Blacher, Reinhard Schwarz-Schilling and Josef Rufer, among others (composition, music theory, twelve-tone technique), graduating in July 1959.

Sep 1958: First visit to the International Summer Courses of Contemporary Music in Darmstadt, where he meets John Cage and Bruno Maderna among other composers.

Music for seven instruments in Darmstadt.

6 Sep: Premiere of Five pieces for piano at the Gaudeamus Muziekweek in Bilthoven. German premiere on 1 Oct in Krefeld.

April: In South Korea, the regime under Syngman Rhee is forced to resign.


Nov 1960-Jan 1961: Yun stays at the Urberger Contakt-Centrum in the Black Forest, Germany (an international meeting place for artists and scholars).


Sep 1961: Sooja Yun joins her husband in Germany (the children follow in 1964). Together, they move to Freiburg im Breisgau.

Gasa for violin and piano as well as Garak for flute and piano.

Loyang for chamber ensemble in Hanover.

Treaty on Basic Relations between Japan and the Republic of Korea.

30 Jan: Premiere of the oratorio

Yun is kidnapped by the Korean intelligence service and taken to Seoul. He is accused of espionage for North Korea. On 13 Dec, he is sentenced to life imprisonment at first instance. 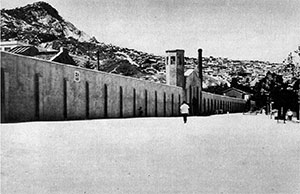 On appeal, his sentence is commuted to 15 years imprisonment. In appellate court, the sentence is reduced once more on 13 March, this time to 10 years.

Sentence is suspended on health resaons and Yun is hospitalised under guard. He composes the chamber music works

Riul for clarinet and piano as well as Images for flute, oboe, violin and cello. 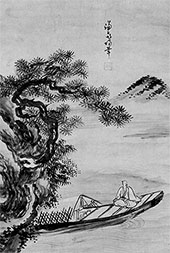 Becomes a member of the Free Academy of Arts in Hamburg.

Following international protests and the intervention of his friends as well as the Federal Foreign Office, Yun is released from prison on 24 Feb. He returns to West Berlin on 30 March.


1969-71: Teaching assignments for composition at the College of Music and Theatre in Hanover.

23 Feb: Premiere of the double opera bill Dreams: The Dream of Liu-Tung and Butterfly Widow in Nuremberg. Subsequent guest performances in Berlin, Frankfurt/Main, at the Munich Gärtnerplatztheater (1970) and the Vienna Volksoper (1972).

From 1970/71: Teaching assignments for composition at the College of Music and Performing Arts in Berlin (today’s University of the Arts Berlin).

20 June: Premiere of the opera

1 Aug: Premiere of the opera

Sim Tjong as part of the cultural programme for the Olympic Games in Munich. 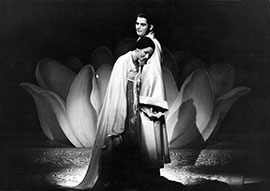 Following the abduction of opposition leader Kim Dae-jung by the South-Korean intelligence service, Yun supports campaigns of Korean exile organisations for democracy in South Korea and the reunification of the divided country.


Appointed Honorary Professor at the College of Music in Berlin.


Becomes a member of the Academy of the Arts in Berlin. 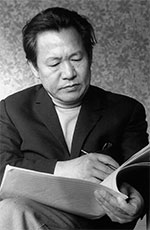 1 March: Foundation of the Forum for Democracy in Korea in Bonn, chaired by Du-Yul Song.

At a conference of exiled Koreans in Tokyo, the South-Korean intelligence service makes another attempt to kidnap Yun.

25 March: Premiere of the

Concerto for Cello and Orchestra in Royan, France.

Foundation of the Union of Overseas Koreans in Tokyo, an international umbrella organisation of Koreans in exile who support the cause of democracy and reunification of Korea.


Non-Korean friends of Yun found an International Solidarity Committee, or Korea Committee in Germany, merged into the Korea Association in 1994.

May: Massacre at Gwangju.

In response to political events in Korea, Yun composes the solo cantata Night, Be Parted based on poems by Nelly Sachs (1980) and the orchestral work Exemplum in memoriam Kwangju (1981).

Violin Concerto I in three movements based on Classical and Romantic models.

Sept: Yun concerts in both Korean capitals; the musicians include Eduard Brunner, Heinz and Ursula Holliger, Francis Traivs. Since then, an annual Isang Yun Festival has been held in Pyongyang.

Dec: Foundation of the Isang Yun Music Institute in Pyongyang.

Symphony I in Berlin.

Oct/Nov: Composition classes in Japan and People’s Republic of China.

Grand Cross for Distinguished Service of the German Order of Merit from the Federal Republic of Germany.

Honorary member of the International Society for Contemporary Music. 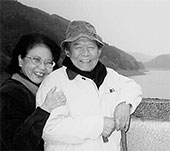 Thomas Mann Medal of the Free Academy of the Arts, Hamburg, where Yun becomes an honorary member in 1993.

May: Yun is appointed the first Guest Professor of Poetics at the ‘Mozarteum’ College for Music and Performing Arts in Salzburg.

3 Sept: Failed attempt to return to South Korea on the occasion of the Isang Yun Festival in Seoul.


3 Nov: Isang Yun dies at the Waldkrankenhaus in Berlin-Spandau. He is buried in a grave of honour at the Landschaftsfriedhof cemetery in Berlin-Gatow. 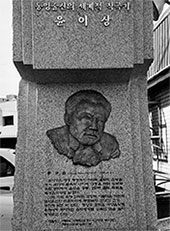