The new Stravinsky Violin Collection surveys nine works for violin and piano, including the Suite Italienne based on Pulcinella and the Duo Concertante. 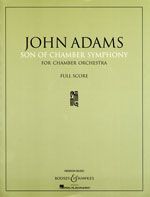 First publication of Adams's second chamber symphony, following in the footsteps of the first as one of Adams’s most programmed works.