The Organ Concerto “Okeanos” is in four movements, combines two slow and two quick sections in alternation, and juxtaposes the organ against a large orchestra that includes four percussionists in addition to the usual instrumentarium. Besides various drums and gongs, the required instruments also include vibraphone, glockenspiel, tubular bells, plate bells, two Vibratones, and wind maschine. The tonal spectrum is additionally expanded by celesta and harp. According to the composer, the title (Okéanos, Oceanus, but also origin of the world) refers “to an idea of immense (and sometimes unfathomable) greatness and breadth, which conjures up in my mind the thought of the organ,” whereby “it does not have to do with tone painting in a superficial sense.” And “religious associations” that “often appear inevitable with this instrument” are avoided – the work “was consciously conceived for a concert-hall organ,” which receives virtuoso solo tasks and fashions continually new combinations and dialogues with the very differentiated orchestral timbres. Extremely intimate, delicate moments alternate here with the solo instrument’s quasi-playful vying with the orchestra, and also with ecstatic sonic outbreaks that additionally gain in intensity through fast tempos and incisive rhythms.

In its structure, “Okeanos” follows the principle of the “golden mean,” that is to say, within the length of the whole work, as well as in those of the individual movements, the sum of their lengths is in the same ratio as the larger length to that of the respective shorter length, etc. In this way, the work’s temporal and formal proportions are subject to an exactly conceived structure. From the outset, the title evokes the association with “water,” whose motion in the first movement indeed appears to be reproduced through orchestral “waves.” Movements 2, 3, and 4 have other characteristics for which the other elements – air, earth, and fire – provided the ideas or symbols.

In the slow, tripartite first movement (quarter note = 66), the opening chordal expanses of the strings display a latent descending motion (but however receive a static antithesis through the organ). These soon experience contrasts through the soaring woodwind lines, by means of which a rich dialogue is initiated. This is confronted by a second thought in the organ, supported by plate bells, that is further supplemented by a descending line with broad chords. The middle section at first appears to the characterized by rising, broken woodwind motifs over a dark string underground, out of which arise increasingly more powerful brasswind lines that lead to a great climax. Out of this results a short reprise, whose essential figurations are assigned to the bells, which ultimately subsides more and more, and leads attacca into the second movement.

The second, quickly hurrying movement (quarter note = 132) begins with virtuoso figurations in the organ that soon receive chordal support in the pedal. Out of this contrast arises intensification that culminates in the entry of the wind maschine, thus establishing the association with "air." In the middle section, the organ is again employed in a very soloistic manner, and then also sparks a chamber-music-like battle until, after a further climax, the reprise begins, leading to a tremendously dramatic, insistent fortefortissimo upswing into the third movement.

This movement is again slow (quartet note = 66); it represents the character of the element "earth" and was inspired by a picture of a wide grotto that repeatedly reflects the sound back as an echo. After introductory organ motions, counterpointed by the percussion, a seemingly "mysterious" layering of triads in semitone intervals commences. This fundamental idea continually receives new characteristics until vibratones evoke the impression of drops in a cave, and the triads become series of semitones in a second section. Here, too, their layers experience continually new illuminations. Then, in the third section of the form, broad spectral chords enter. The semitones are spread in wide layers and commented upon by the soloistic organ before a short reprise of the opening section once again calls to mind, reminiscence-like, the "drops."

The finale, with its increased tempo (quarter note = 140), is highly virtuosic. The numerous meter and rhythm changes, like a repeatedly flaring up "fire," provide for broad outbreaks of continually newly fashioned sounds. An unfettered intensification of the basic motif (c2–f2–a2–c-sharp2) and its variants conclude the first section, which is now followed by a nearly chamber-music-like transparent section determined by layers of semitones and thirds in the organ. These are subsequently joined by concertante densifications kindled by the solo instrument. With tighter motion, which has the effect of a conclusion of the previous dialogues, the varied reprise of the first section is then introduced, its richly fashioned development incorporating elements of the second section, and finding its climax in an ecstatically prepared voluminous chord that sees the organ in fortefortissimo. Now the events regress briefly, but soon push forward with elements of the second section to finally arrive at the coda with a chordal entry of the opening motif. Here again several fundamental elements of the finale appear to be addressed, until the organ, with a last intensification, leads into a ffff, then forming the concluding chord together with the orchestra.

"Okeanos" was written by Bernd Richard Deutsch between September 2014 and August 2015 in Vienna and in Contovello (near Trieste) as a commission from the Gesellschaft der Musikfreunde and the ORF Symphony Orchestra Vienna.
© Hartmut Krones (2015)

Die Presse
"...an almost inexhaustible wealth of vivid musical characters, situations and gestures hurriedly intermingle, this time converging the four movements with the four elements of classical antiquity... When the waves build up, an airy repartee of high notes between organ and orchestra grows into shimmering shapes and humorous registration effects… Everything is of course woven into a gripping dramaturgy, in which melodic particles and complex rhythms, virtuoso passages, thundering chords and chamber music-like transparent dialogues grasp each other – logically, despite all the individual surprises – as in a well-oiled machine."

Cleveland Plain Dealer
“The variety in Okeanos (the Greek mythological figure representing oceans) was stunning. From subdued and mysterious, a la Messiaen, Jacobs and the orchestra were as likely Thursday to turn bubbly, playful, or even crazed as they were to let out a thunderous, screaming yawp. Through it all, the music managed to emulate water, air, earth, and fire, always without recourse to overtly literal means …

Still, if Okeanos had one key virtue, it was orchestration. Time and again, Deutsch found spine-tingling parallels between the organ and a raft of percussion instruments, uniting front and rear stage in ways that can only be described as magical.”

Out of four basic elements, Jacobs, Welser-Most, and the orchestra forged musical gold.” 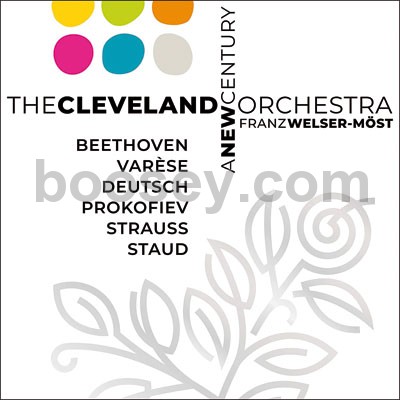 
News stories for this title:
Deutsch’s Okeanos: A Thunderous Triumph in Cleveland