Symphony: ‘Vigil’ is the last of three interrelated works forming a triptych commissioned by the London Symphony Orchestra for performance in 1996 and 1997. The first work, The World’s Ransoming for cor anglais and orchestra, was premiered by Christine Pendrill and Kent Nagano in July last year, and the second, a Cello Concerto for Mstislav Rostropovich, was premiered with Sir Colin Davis conducting in October of the same year. All three relate to the historic events and religious liturgies of the Easter Triduum, namely Maundy Thursday, Good Friday and the Easter Vigil, and the overall title of the orchestral triptych is Triduum.

The initial inspiration for Symphony: ‘Vigil’ came through the potential interplay of the elements of fire and water, which are central to the liturgy of the Easter Vigil. This ceremony is also known as the Service of Light and it was the light-giving aspect of fire which especially caught my imagination, including the possibilities of playing with the differences in light and shade, from complete darkness and bleakness to blazing illumination and everything in between. Although the first movement is called Light, it deals specifically with the promise of a glimmer of light in the darkness - it is only at the very end of the movement that suddenly there are tentative little flames of sound on flutes, percussion, harp and keyboards. And in the symphony as a whole there is an opposition between extremes of darkness and light, as well as a continual journey back and forth between these two polarities, following an instinctive dramatic pattern. This capacity for elemental conflict provided me with the basis of a structural process which is elaborated throughout the symphony’s three movements.

A fragment of chant, Lumen Christi, is heard on an off-stage brass quintet in the wings towards the end of the first movement, and other Easter plainsongs are used as building blocks throughout. In the final movement, Water, the baptismal song Vidi aquam functions as a celebration of new life, as does the first appearance of the violins, providing a new colour to the work. The sacramental aspect of birth, or rather rebirth, provided a central metaphor behind much of my work on the symphony. Many earlier works in the symphonic genre have focused on fundamental human and spiritual archetypes such as life forms, life spans, natural transformations, or the journey from life to death. This symphony can be viewed as a further exploration of the theme, particularly the passing of one existence and the beginnings of another, new and on another plane.

The central movement has a Latin title Tuba insonet salutaris (Sound the trumpet of salvation) which is a line from the Exsultet (the Proclamation of Easter) which is sung at the Easter Vigil. The brass quintet, which played unseen at the end of the first movement, now comes into the auditorium and the players position themselves at five different points, representing the trumpets of salvation. The aural perspective takes on new dimensions as music is heard from all angles, and the sounds are bright and startling. The Exsultet melody, described by Mozart as probably the most beautiful ever written, forms the musical basis of the second movement.

Let the angelic crowd of heaven exult:
let the divine mysteries exult:
and for such a great victory of the King
sound the trumpet of salvation.

The final movement opens savagely but subsides towards the presentation of two conflicting principal materials - a wild, ecstatic dance followed by a slower, more mysterious texture, ebbing and flowing underneath an expressive woodwind melody. The central development of these materials, over a long and slow build-up, leads to their transformation into each other. This climax subsides into a final section with luminous floating chords on high strings accompanying gently soaring trumpet calls and bright percussion.

Though, as with The World’s Ransoming and the Cello Concerto, the liturgy again provided an important determinant in the eventual structure of the symphony, the musical drama does not literally and narratively trace the actual drama of Easter Day. Rather, ideas are taken from the liturgy - elements, metaphors and plainchants - which give sparks to new, purely musical directions.
James MacMillan, August 1997

"...a breathtaking piece, potent, haunting and magnetic, and with a profound inner beauty which speaks of music conceived by the soul... the whole symphony seems to be a natural progression from its early dark murmurings towards the incandescence of the finale."
Daily Telegraph

"...it has the feel of a real symphony: a large-scale, organically developing canvas, a massive emotional journey that travels from darkness into light, from bleak reality into transcendence."
Glasgow Herald 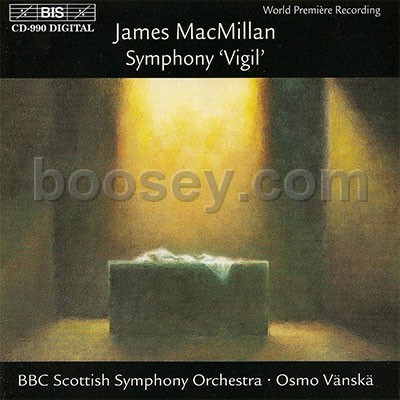