Dancing on the bones is a ‘diabolic’ scherzo for large ensemble. This kind of symphonic poem was popular in the second half of the nineteenth century, and I have taken as a model Danse macabre by Camille Saint-Saëns. The sonata form, with its two themes, is retained, but the duration has been multiplied by 1•7. The xylophone in Danse macabre depicts the bones of dancing skeletons, and it appears at the same relative positions in my own piece. The combination of the perfect and the diminished fifth in the ‘detuned’ violin solo of Saint-Saëns’ devil is also used as structural pitch material. Towards the end a children’s choir sings a text about what happens to the body when you die. Dancing on the bones may serve as the final part of the Trilogy of the Last Day, a cycle of compositions about mortality.
Louis Andriessen, 1998

Reproduction Rights:
This programme note may be reproduced free of charge in concert programmes with a credit to the composer. 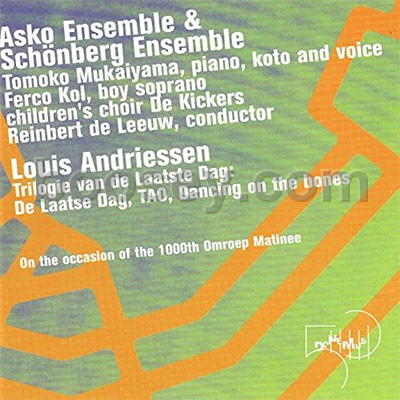