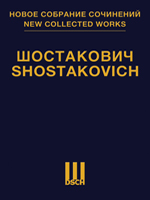 A selection of favourite pieces and publications, including his Symphony No.5 and Piano Concerto No.2

Shostakovich was one of the leading composers of the 20th century, and was Soviet Russia’s most important symphonist. Unlike some of his composer contemporaries, he lived his adult life entirely inside the USSR - and his music was deeply affected by political events there, especially under Stalin. Whilst an absolute master of large-scale forms, the character of his music, with its invitingly enjoyable dissonances, has a humorously powerful sense of mockery and irony mixed with grandeur and despair.

"What are human emotions? Not only lyricism, sadness and tragedy, but laughter. When a listener laughs loudly during my symphonic concert, it doesn’t shock me a bit. On the contrary, it pleases me." — Dmitri Shostakovich