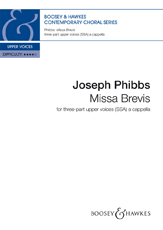 Following its recent premiere in Wells Cathedral, this attractive new work for upper voices is available to order now.

Filling a gap in the repertoire, Phibbs's Missa Brevis is written for unaccompanied upper voices in three parts. It offers some rhythmic challenge and the texture is largely polyphonic with points of imitation and shorter homophonic phrases. The interplay between the three parts adds to the enjoyment of ensemble singing and is immediately engaging for audiences and congregations alike.

This setting of the Ordinary of the Latin Mass (without Credo) began as in introit in 2009. The Gloria and Agnus Dei followed due to a commission from a children’s choir in Indonesia (evidence of which may be perceived in some of the work’s Eastern harmonic overtones). The remaining portions of the Mass were completed in 2015 and the work was premiered in May 2016 by the choristers of Wells Cathedral Choir.