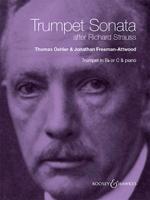 If there was ever a composer in the modern era from whom instrumentalists would hanker for a sonata or concerto, Richard Strauss must be right up there.

His wide-ranging orchestral and operatic creations bleed with gloriously idiomatic writing for every instrument, and yet only the piano, violin, clarinet (in tandem with the bassoon), oboe and horn can really claim to have bespoke solo works from the composer’s seamlessly productive pen, and collectively they form only a small proportion of the composer’s output. No mere transcription, this three-movement Sonata after Richard Strauss extends well beyond a redeployment of the composer’s music to fit a new idiom, filling the gaping chasm of ‘serious’ late-Romantic recital material for trumpet players, to be performed in toto or as Drei Konzertstücke.

Thomas Oehler and Jonathan Freeman-Attwood have drawn on a wide range of Strauss’s works to create the new offering, including the Violin Sonata, Von den Hinterweltlern (Also sprach Zarathustra), the Serenade for Winds (‘From an invalid’s workshop’) and Zerbinetta’s Aria (Ariadne auf Naxos).

The publication includes parts for trumpet in B flat and in C.