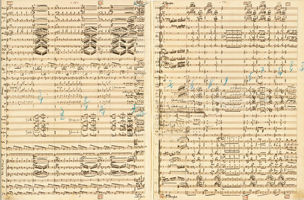 One hundred years ago, on 29 May 1913, a seminal work of the 20th century was premiered in Paris: Igor Stravinsky’s The Rite of Spring. It was an epochal moment in the history of both music and ballet, and it signalled the breakthrough into Modernism. Subtitled ‘Scenes from Pagan Russia’, it is a work of international scope created as a collaboration among leading figures working in multiple genres – and a masterpiece of extraordinary artistic potency. The Rite reflects an entire century, and is reflected there in return.

To honour this occasion the Paul Sacher Foundation in Basel, which houses the Stravinsky archive, is issuing a Centenary Edition in three volumes published for the first time: an annotated facsimile of the autograph full score, another of the composer’s version for piano four-hands and a new collection of essays by leading Stravinsky scholars.

These limited edition volumes offer a once-in-a-lifetime opportunity for anyone interested in contemporary music and art.

Facsimile of the autograph full score Edited by Ulrich Mosch With an introduction in German and English.
This magnificent manuscript is undoubtedly one of the most important documents, not only of Stravinsky’s oeuvre, but of the entire holdings of the Paul Sacher Foundation.

The expressive calligraphy, for which the composer had a fine talent, distinguishes the autograph score in a very special way. Abounding in corrections as well as conducting and publication markings, this manuscript initiated a long process of revision that lasted for decades as the work was extensively edited
for publication from 1922 onwards.

The edition allows a wider readership to see Stravinsky’s Rite in its original forms for the first time, thereby providing an opportunity to further engage with this seminal piece of art.

Facsimile of the version for piano four-hands, Edited by Felix Meyer with an introduction in German and English.
In May 1913, a few days before the premiere, Édition Russe de Musique published the composer’s version of The Rite of Spring for piano four-hands. This piano reduction was primarily intended for study and rehearsal purposes, but in recent decades it has also found a home on the concert platform.

The manuscript, partly in Stravinsky’s and partly in a copyist’s hand, was fully authorised by the composer. Long considered lost, it is now made available to the public for the first time. Not only does it allow a critical examination of the resulting printed edition, its detailed corrections also shed valuable light on Stravinsky’s efforts to have his piece represented as accurately and idiomatically as possible on the piano.

Edited by Hermann Danuser and Heidy Zimmermann. 18 Essays in English.

This richly illustrated collection of 18 essays provides an overview of current research on The Rite of Spring,
opening new perspectives on the work and its impact.

Turning to previously unknown sources, the essays cover the circumstances of The Rite’s emergence, its contexts and revolutionary potential, as well as its cultural background, poised between archaism and modernity. The myths surrounding the work are critically examined, and the first century of its international reception is viewed from a wide range of vantage points, from choreographic and musical realisations to the responses of composers and analysts.