Born in Hamburg on 18 January to Adolf and Henny Goldschmidt, second of five children (two sisters and a brother die in infancy). His father works in family business as a merchant, importing bedroom accessories. Both parents are keen music-lovers, his mother an amateur soprano, and his father an avid concert and opera-goer who had regularly seen Mahler conduct at the Hamburg Opera in the 1890s. 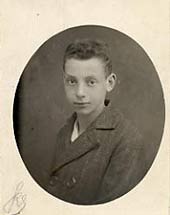 Barmitzvah on 16 January at Bornplatz Synagogue.

Enters Hochschule für Musik, Berlin, in composition class of Franz Schreker (along with Krenek, Haba, Petyrek and Horenstein) and studies conducting with Rudolf Krasselt and Julius Prüwer. Studies philosophy and history of music and art at Friedrich-Wilhelms-Universität where professors include Curt Sachs and Hugo Friedländer.

Plays in premiere of Piano Quintet (lost) at the Hochschule. Discovers short story by Stendhal, Les Cenci. Freelance keyboard work with the Berlin Philharmonic includes two of Berg’s Three Orchestral Pieces, Bartók’s Dance Suite, Webern’s Passacaglia under the composer’s direction, Mahler’s Symphony No.8, and the first Berlin performance of Schoenberg’s Gurrelieder, for which he also coaches the choir. Around this time starts close friendship with the singer Ines Loewen.

Joins staff of Friedrich-Theater, Dessau, as assistant to Franz von Hoesslin. Conducts Suite stilisierter Tänze (a precursor of the Suite op.5) and composes a Requiem for chorus and orchestra (lost). Official conducting career in Berlin launched with Staatsoper Orchestra performances of Grieg’s music to Peer Gynt at the Schiller-Theater. 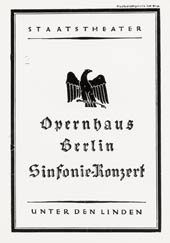 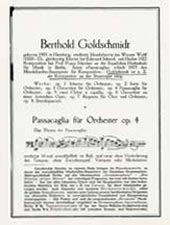 Writes incidental music to a play by Knut Hamsun and makes acquaintance of the leading actor and director, Carl Ebert. Invited to be composer, conductor and adviser to Ebert at Hessische Landestheater in Darmstadt, where he conducts works including Milhaud’s Le boeuf sur le toit and Stravinsky’s Mavra.

Conducts premiere of Partita in Schwerin. Premiere of present version of Overture ‘The Comedy of Errors’ in Oldenburg. 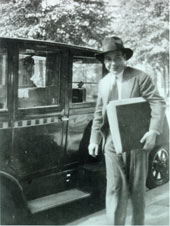 Travels to Paris to obtain belated copyright permission from Crommelynck for operatic setting of his play as Der gewaltige Hahnrei. Completes the opera and Universal Edition offers the premiere successively to Leipzig, Dresden, and Mannheim.

Moves to Berlin, working at Städtische Oper with Ebert. Appointed conductor of a radio orchestra in Berlin, for programmes of light music and opera excerpts. Conducts Dresden Philharmonic in Promenadermusik (lost) at ISCM festival in Bad Pyrmont and meets Copland and Blitzstein. Travels to Russia to conduct summer concerts with Leningrad Philharmonic and meets Shostakovich. Visits Frans Masareel in Paris and obtains from him the rights to make a dance version of Die Idee (ballet remains unrealised). About this time Ines Loewen breaks off relationship with the composer.

Successful premiere of Der gewaltige Hahnrei at Nationaltheater in Mannheim. The work is programmed by Ebert for the 1932/33 season at the Städtische Oper in Berlin. 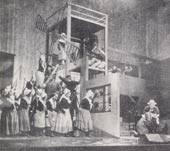 Plans an orchestral suite from Hahnrei for concert performance. When National Socialists achieve political power, Goldschmidt and Ebert are dismissed, and Berlin production of Hahnrei abandoned. His compositions continue to be performed but only in secret. Becomes conductor of orchestra of Jewish musicians intending to join the Palestine Orchestra (later the Israel Philharmonic). 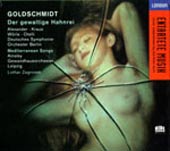 1934
Variations on a Palestine Shepherd's Song

During rehearsals for Jürgen Fehling’s production of Wilhelm Meister at the Staatstheater, the identity of the composer of the incidental music is discovered to be Goldschmidt, and a number of actors stage anti-Jewish protests. Word reaches Goering who orders the music to be removed, but the intendant intercedes with Goebbels and it is performed with the composer’s name suppressed. Is Interrogated by Gestapo officer, but when it turns out they are fellow music-lovers, he advises Goldschmidt to leave Germany immediately. Gives his manuscripts to a friend for safe-keeping (but the house is bombed in the war and many scores lost).

In October emigrates to England, chosen because of the BBC’s international reputation for supporting modern music, and rents flat in Belsize Park, London. Works unoffically as teacher and coach, including giving lessons in Lieder interpretation. 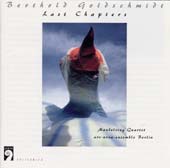 Composes String Quartet No.2 and Ciaccona Sinfonica. Karen Bothe emigrates to London and they are married.

Composes symphony and harp concerto (both destroyed). His father dies in Hamburg.

Kurt Jooss commissions for his company the ballet Chronica, as a successor to The Green Table. Karen sings with Glyndebourne chorus.

His mother emigrates to England, living in Ashtead, Surrey, during the war years. 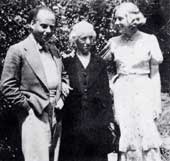 By the end of the war 22 members of his family have perished in Auschwitz and Belsen, while the survivors have emigrated as far afield as the USA and South Africa, leaving him isolated.

Composes incidental music for radio production of Shelley’s The Cenci.

for baritone and xylophone BH

Nicodemus, he was black 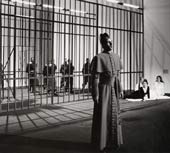 Festival of Britain opera competition. One of four prizewinners with Beatrice Cenci (others are Arthur Benjamin’s A Tale of Two Cities, Alan Bush’s Wat Tyler and Karl Rankl’s Deirdre of the Sorrows), but the works remain unperformed. 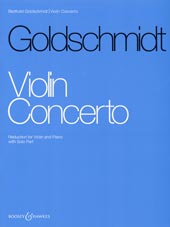 Over a two year period, composes concertos for violin, cello and clarinet, premiered in radio recordings by Erich Gruenberg, William Pleeth and Gervase de Peyer, with the BBC Scottish Orchestra conducted by the composer

In celebration of his 50th birthday, the BBC broadcasts half hour of excerpts from Beatrice Cenci, with the composer conducting the London Philharmonic Orchestra. His mother dies in Hove, Sussex. 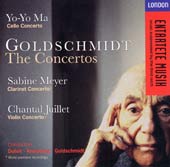 Composes Mediterranean Songs for high voice and orchestra. Turns away from composition and concentrates on conducting.

Begins collaboration with Deryck Cooke (and later David and Colin Matthews) on complete performing version of Mahler’s Symphony No.10

Conducts London Symphony Orchestra in completed Cooke version of Mahler's Symphony No.10, with further performances in Berlin, Munich and Darmstadt 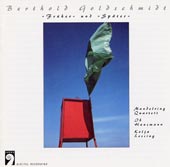 At suggestion of Gervase de Peyer, breaks 24-year silence with Clarinet Quartet. Is invited to New York and Yale University

80th birthday celebrations include run-through of scenes from Der gewaltige Hahnrei at Trinity College of Music in London, conducted by Bernard Keeffe. Meets David Drew and begins publishing collaboration with Boosey and Hawkes 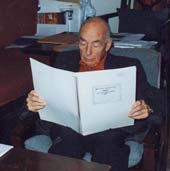 Attends premiere in Rendsburg by Auryn Quartet of String Quartet No.3, commissioned by Schleswig-Holstein Ministry of Culture

for violin and viola BH

Fantasy for oboe, cello and harp 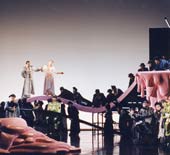 for violin and cello BH

for clarinet and cello BH

or violin and piano BH

Travels to Montpellier for concert premiere of Violin Concerto, with Chantal Juillet conducted by Charles Dutoit. Goldschmidt is Honoured Artist at Berlin Festwochen, including German premiere (concert performance) and Sony recording of Beatrice Cenci. Der gewaltige Hahnrei staged by Harry Kupfer at the Komische Oper, a first Berlin production ‘postponed’ from 1933. Stage premiere of Beatrice Cenci at Magdeburg Opera. Rediscovery of early scores including Passacaglia, Partita and Suite in Vienna and surprise presentation to the composer in Berlin. Composes Les petits adieux. Conducts performances of Violin Concerto with Chantal Juillet in Madrid and London and records the work for Decca.

for baritone and orchestra BH