Eric Whitacre introduces his new large-scale choral work The Sacred Veil, receiving first European performances in London and Amsterdam this season and a new Signum recording by the LA Master Chorale in 2020. 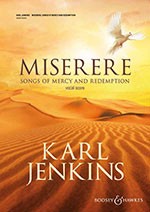 This new work, reflecting on themes of mercy, is now availabe as a vocal score alongside the Decca recording.