A year by year alignment of Andriessen's life and works

Born on 6 June in Utrecht into a musical family. His father Hendrik, a composer and organist at the cathedral, instils a fascination with Bach and a love of French music including that of Roussel, Duparc and Chausson. His uncle Willem is a composer and pianist, and his older brother Jurriaan a composer.

Starts listening avidly to jazz on radio, including Stan Kenton. Family moves to The Hague.

Jurriaan returns from USA with collection of early jazz recordings, stimulating a lasting love of bop and cool, including Charlie Parker, Dizzie Gillespie and Miles Davis.

Composition studies with his father

Writes Sonate for flute and piano, the earliest piece to remain in his catalogue

for flute and piano Don/BH

for cello or double bass and piano BH

Composes Séries for two pianos, one of the first Dutch serial works

for soprano and chamber orchestra BH

for flute, oboe and clarinet Don/BH

Paintings for flute and piano Moe

Triplum per chitarra for guitar BvP 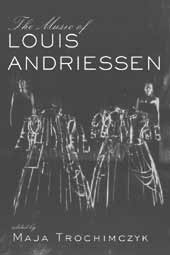 (Concept I) for 2 pianos and ensemble Don/BH

for clarinet and piano Don/BH

for 2 pianos and ensemble Don/BH

Anachronie I, with its references to Italian pop music and its collaging of styles, represents broadening of influences

The Garden of Ryoan-gi for 3 electric organs ms

Co-operative opera Reconstructie attempts break with conservative Dutch musical tradition. Protest at Concertgebouw concert with the group known as ‘Nutcracker’ against the orchestra’s then scant programming of living composers is quelled by the demonstrators’ ejection from the hall: the composer decides not to write again for conventional symphony orchestra

[How it is] for live electronics and 52 strings Don/BH

The Nine Symphonies of Beethoven, with an ice cream bell challenging the hegemony of the classics, represents a crisis point: new avenues for a positive synthesis of music and politics are to open up

The nine symphonies of Beethoven

for an unlimited number of any instruments Don/BH

Founds wind band De Volharding (Perseverance), to take music out to the people on the streets. The work of that name confronts the new avant-garde of American minimalism for the first time, and initiates a re-examination of unison writing. Starts work on De Staat, which is intended as an objective counterbalance to the ethereal minimalism of Terry Riley.

for voice and piano

Begins teaching instrumentation at the Conservatory in The Hague

Hymne to the memory of Darius Milhaud

Experiments at the Conservatory with music written for two symmetrical groups of instruments, leading to founding of Hoketus to rehearse and perform the music’s complex rhythmic interchanges. Completes De Staat whose premiere in Amsterdam provides a defining moment in Dutch new music.

for 2 groups of five instruments BH 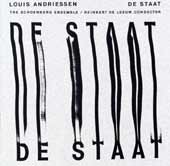 Appointed as composition teacher at the Conservatory in The Hague

Reinbert de Leeuw conducts premiere of De Tijd in The Hague. Hoketus tours a programme of Andriessen, Rzewski and Nyman around the UK on the Contemporary Music Network including a concert at the Huddersfield Festival.

for violin and piano Don/BH

Begins work on De Snelheid. John Adams conducts members of the San Francisco Symphony in the US premiere of De Staat.

Premiere of De Stijl in Amsterdam

Lectures on musical theory and composition in USA at Yale. Hoketus is disbanded. Work continues on De Materie, commissioned for the opening of the new Muziektheater in Amsterdam.

[The Tower] for carillon Don/BH

for reciter and ensemble Don/BH

First collaboration with Peter Greenaway in video film, M is for Man, Music, Mozart, commissioned by BBC TV for the composer’s bicentenary. New series of recordings on Nonesuch inaugurated with De Staat.

for jazz singer and ensemble BH

for piano and toy piano BH

for soprano and chamber orchestra BH

for soprano, flute and cello BH

Festival weekend in The Hague includes the Residentie Orkest in Mausoleum and Nocturnen. Huddersfield Festival feature includes UK premiere of Hadewijch. Documentary film by Peter West and Steve Martland, A Temporary Arrangement with the Sea, is screened on BBC2 TV. Memory of Roses album recorded. Awarded the 3M Music Laureate, then the most prestigious Dutch arts prize. 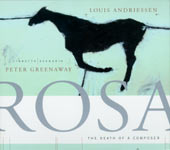 Artistic Director of Meltdown festival at South Bank Centre in London. First UK performance of the complete De Materie consolidates reputation as a major international figure. Featured composer at Tanglewood Festival including US premiere of Hadewijch. Rosa, a first operatic collaboration with Peter Greenaway, is staged at Muziektheater in Amsterdam, with 10 sell-out performances.

A Song of the Sea

Premieres of The Last Day in Amsterdam under Reinbert de Leeuw and TAO in Donaueschingen under Peter Eötvös. Featured composer at Settembre Musica in Turin, including Italian premieres of De Tijd and De Materie. US premiere of De Stijl at BAM Festival in New York and Finnish premiere of De Staat by Avanti. Lectures at Princeton in USA. Nonesuch releases complete recording of De Materie to great critical acclaim.

[Trilogy of The Last Day Part I] for 4 male voices, child’s voice, and large ensemble BH

Ensemble Modern gives first complete performance of Trilogy of the Last Day in Cologne, the Italian premiere of De Snelheid in Turin, and tours De Staat to Berlin, Frankfurt and Vienna.

[The Heralds] for brass and timpani BH

Dutch premiere of complete Trilogy of the Last Day is 1000th VARA Matinée concert at the Concertgebouw. Revival of Rosa at Muziektheater in Amsterdam. Frank Scheffer film The Way, based on TAO, produced by Allegri Film and AVRO

[The First Lover] for boy soprano and organ BH

Completes second operatic collaboration with Peter Greenaway, Writing to Vermeer, which is premiered in Amsterdam in December. Performances and record releases to celebrate 60th birthday.

What Shall I Buy You, Son?

for a singer who also writes BH

[the wings of memory] for voice and piano BH 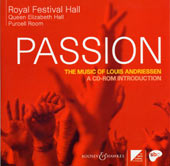 Andriessen festival at the South Bank Centre in London, including world premiere of La Passione and concert performance of Writing to Vermeer. New books on the composer published by Routledge and Arc.

Fanfare, to start with

for six groups of horns