Born 5 June (17 June New Style) at Oranienbaum, on the gulf of Finland thirty miles from St. Petersburg, where his father, a leading operatic bass at the Maryinsky Theatre, has rented a dacha.

Meets his cousin and future wife, Catherine Nossenko, at her father’s estate at Ustilug, western Ukraine.

Goes to school (2nd St. Petersburg Gymnasium), having previously been taught - like his three brothers - by tutors in the family apartment. First piano lessons. Attends 50th anniversary performance of Glinka’s Ruslan and Lyudmila at Maryinsky, probably the first opera he has seen.

First trip abroad, with his parents to Bad Homburg, near Frankfurt.

Death of his older brother Roman 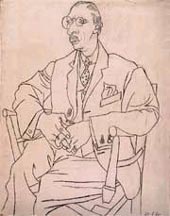 Begins law studies at St. Petersburg University and, privately, music theory lessons with Akimenko, who is soon replaced by Kalafaty.

Visits Rimsky-Korsakov in Heidelberg and shows him his compositions. Death of his father from cancer.

Starts his first large-scale work, a piano sonata, at his uncle’s Samara estate (Pavlovka). Informal work with Rimsky at his dacha at Krapachukha.

Conducts cantata for Rimsky’s 60th birthday at a party in the Rimsky flat.

The Mushrooms Going To War

for bass and piano BH

Conductor and Tarantula for voice and piano (presumed lost)

First public performances: The Faun and the Shepherdess and part of the Symphony in E flat, at rehearsal concerts of the Petersburg Court Orchestra

Faun and Sheperdess op.2 for mezzo-soprano and orchestra Bel

Pastorale for soprano and piano Sch

Kobold (Grieg) orchestrated by the composer

Nocturne in A flat

orchestrated by the composer BH

orchestrated by the composer BH

transcribed for bass and orchestra BH

First visit to Paris for the Ballets Russes premiere of The Firebird, where he meets Debussy, Ravel, and other notables. After its triumph, decides to winter in Switzerland (Clarens) and the south of France (Beaulieu).

transcribed for baritone or bass and orchestra BH

for baritone and orchestra BH 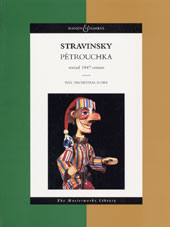 Completes Petrushka in Rome. Paris premiere of Petrushka with Nijinsky, designs by Benois. Summer at Ustilug, but winter again at Clarens, composing The Rite of Spring.

for high voice and piano BH 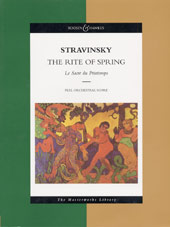 First visit to London. Near riot at Paris premiere of The Rite of Spring. Contracts typhoid from a bad oyster. Final summer at Ustilug.

for high voice and piano or chamber orchestra BH

Catherine’s tuberculosis erupts after the birth of fourth child. Completes Nightingale for Moscow Free Theatre, which disbands before the work can be staged. Conducting début (Montreux). Flying visit to Ustilug and Kiev before war breaks out. Works at Salvan and Clarens on Les Noces and Russian songs. 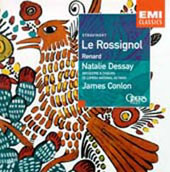 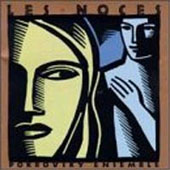 Song of the Volga Boatmen arranged for wind and percussion Ch

Berceuse for voice and piano FF 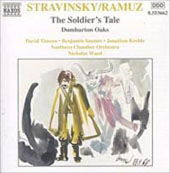 Financial hardship. Collaborates with Ramuz on The Soldier’s Tale, but the flu epidemic prevents all but the Lausanne performance. War ends. His sister-in-law and family reach Morges and move in with the Stravinskys.

Pulcinella staged in Paris. Moves from Switzerland, via Brittany, to Coco Chanel’s villa in Garches (Paris). Composes Symphonies of Wind Instruments. Paris revival of The Rite, with choreography by Massine. 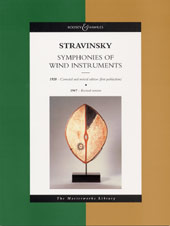 Row with Diaghilev over payments, but hardship eased by donations from America. Starts Pulcinella.

Fragment from Symphonies of wind instruments 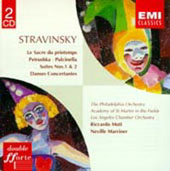 Meets and falls in love with Vera Sudeikina. Moves with family to Biarritz, but takes studio at Maison Pleyel (Paris), with whom he signs a contract to cut piano rolls of his works. In London for The Rite and premiere of Symphonies of Wind, and later for Diaghilev’s production of Tchaikovsky’s Sleeping Beauty. Begins Mavra.

Suite No.2 for chamber orchestra Ch

Vera separates from her husband. Diaghilev stages Renard and Mavra. Starts Octet. Spends autumn in Berlin and meets his mother off a Soviet boat at Stettin. In Berlin, meets Pierre Souvtchinsky and George Antheil. Visited in Paris by Mayakovsky.

Les Noces completed and staged. With Vera to Weimar for Bauhaus Soldier’s Tale, meets Busoni, Kandinsky and (probably) Klee. Conducts Paris premiere of the Octet and, for the first time, a whole concert of his works. 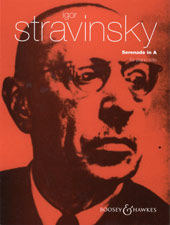 Publishes ‘Some ideas about my Octuor’. Completes and premieres Concerto for Piano and Wind Instruments. First concert tours, conducting in Belgium and Spain, and playing the concerto in Copenhagen, Warsaw, Holland, Germany, Switzerland and Marseille. Paris stage premiere of Soldier’s Tale. Moves with his family from Biarritz to Nice.

1924
Concerto for Piano and Wind Instruments

First US concert tour. Signs first recording contract (with Brunswick). Plays Sonata in Venice. Embarks on Oedipus Rex with Jean Cocteau. His niece Tanya from Leningrad spends a year with the family in Nice.

Suite No.1 for small orchestra Ch

Conducts Rite of Spring for the first time. Return to (Orthodox) communion. First journey by air (from Paris to Croydon). 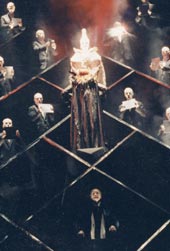 Oedipus Rex completed, and premiered (as an oratorio) by Diaghilev. Plays Concerto for Piano and Wind Instruments in London. Summer at Echarvines, on the Lac d’Annecy. Begins Apollo to a commission from Elizabeth Sprague Coolidge.

Stage premieres of Oedipus Rex in Vienna, and in Berlin (under Klemperer, attended by the composer). Apollo staged in Washington and by Diaghilev in Paris (choreography by Balanchine). Records Petrushka and Firebird for Columbia, and composes The Fairy’s Kiss for Ida Rubinstein.

Composers and premieres Capriccio (under Ansermet in Paris). Death of Diaghilev. Records The Rite of Spring. 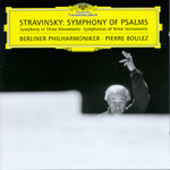 Composes Symphony of Psalms (first performances in Brussels and Boston). Summer at Charavines, near Grenoble. First meeting with the violinist Samuel Dushkin for whom he starts a concerto.

Moves from Nice to Voreppe, near Grenoble. Conducts Violin Concerto with Dushkin in Berlin.

Concerto in D for violin and orchestra Sch

First concert tour in duo with Dushkin, for whom he composes the Duo concertant and various arrangements.

Persephone premiered in Paris. Takes French cititzenship. Moves with his whole family from Voreppe into a large Paris apartment in the Faubourg Saint-Honoré.

for chorus a cappella BH

Divertimento for violin and piano

for orchestra (Symphonic Suite from The Fairy’s Kiss) BH 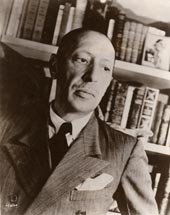 Second US tour (with Dushkin). Publication of first volume of autobiography (Chroniques de ma vie). Premieres (with his son Soulima) the Concerto for two pianos. Meets Mussolini in Rome. Marriage of his daughter Lyudmilla with Yury Mandelstam. Catherine, in the advanced stages of tuberculosis, spends much time in a sanatorium in Sancellemoz (Haute-Savoie).

Third US tour, including premiere of Jeu de cartes in New York (with Balanchine). Much of the year is spent with his family either in Sancellemoz or at the nearby Château de Monthoux at Annemasse. Lyudmilla also ill with tuberculosis. Dispute with Ansermet over cuts to Jeu de cartes.

Dumbarton Oaks concerto premiered in Washington under Boulanger. Stravinsky figures in Nazi exhibition of ‘Degenerate Music’ in Düsseldorf. Lyudmilla dies in Paris while Stravinsky is in Italy. Begins Symphony in C.

Catherine dies in Paris. Stravinsky himself spends months at Sancellemoz, preparing his Harvard lectures with Roland-Manuel. Death of his mother. Leaves for New York just after outbreak of war. First set of Charles Eliot Norton lectures in Harvard, and concerts in several US cities. 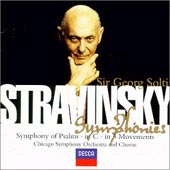 Vera arrives in the USA, and they marry in Bedford (Massachusetts). Completes Harvard lectures. Applies for US citizenship. Settles in Beverly Hills (Los Angeles). Symphony in C is finished and performed in Chicago, under the composer.

Symphony in C for orchestra Sch

Moves to West Hollywood, but tours US widely conducting his own music, including the new symphony. Death of his brother Yury in Leningrad.

Completes Danses concertantes, and works on a variety of occasional pieces, including what will become part of the Symphony in Three Movements

Composes Ode in memory of Natalie Koussevitsky, and revises ‘Danse sacrale’ in The Rite of Spring. Works on film projects, none of which comes to fruition.

More occasional works, including Babel and the Scènes de Ballet. But also composes, on a new religious impulse, the 'Kyrie' and 'Gloria' of the Mass.

for jazz ensemble or orchestra BH*/Sch/ch 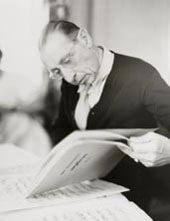 End of the war. Stravinsky completes Symphony in Three Movements for the New York Philharmonic Orchestra. Igor and Vera become US citizens.

Concerts in Cuba and Mexico, as well as across the USA. Revises Petrushka and starts Orpheus for Kirstein’s Ballet Society. Visits Turner, Hogarth and Constable exhibition in Chicago.

Correspondence with the 23 year-old Robert Craft about the unpublished Symphonies of Wind Instruments, which Stavinsky is revising. Begins collaboration with W.H. Auden on The Rake’s Progress. 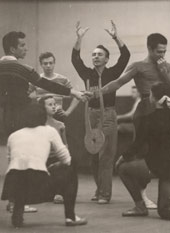 Dissociates himself from the Soviet peace delegation including Shostakovich. Craft moves in with the Stravinskys and becomes in effect the composer’s assistant and musical secretary.

US travel, both professional and leisure

Completes The Rake’s Progress. Returns to Europe for the first time since 1939 to conduct the premiere in Venice. Concerts in Germany and Italy. In Germany he hears the music of the European avant-garde, including Boulez.

Encounters with chamber works by Schoenberg and Webern which Craft is rehearsing in Los Angeles. European tour. Takes part in the ‘Oeuvre du XXème siècle’ festival in Paris, at which he hears Berg’s Wozzeck and Boulez’s Structures, and conducts a tableau vivant staging of Oedipus Rex with Cocteau as Speaker and designer. Completes Cantata.

US premiere of The Rake at the New York Met. Completes Septet. Meets Dylan Thomas with a view to an operatic collaboration, but Thomas dies six months later. First notations for Agon. 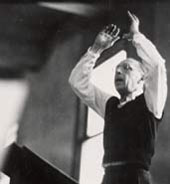 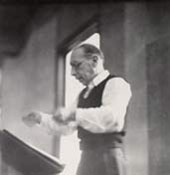 for flute, clarinet and harp BH

for mixed chorus a cappella BH 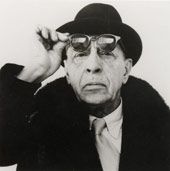 Tours of South America and Italy, during which Stravinsky is carried out of the Hotel Bauer-Grünwald in a Venice flood. Writes Monumentum pro Gesualdo and starts A Sermon, a Narrative and a Prayer for Paul Sacher.

A Sermon, a Narrative, and a Prayer

Dines with Kennedy at the White House. Completes The Flood (which goes out on TV with interruptions for shampoo ads). Tours South Africa, then Europe, where he spends his 80th birthday in Hamburg. After a brief return to New York, embarks on tour of Israel and USSR, his first return since 1914.

for chorus a cappella BH 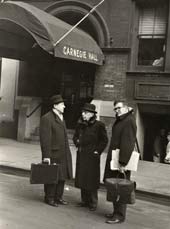 Moves to a larger, more accessible house in the same West Hollywood street. Premiere of Abraham and Isaac in Jerusalem, under Craft. Finishes Elegy for JFK and the Variations.

for baritone or mezzo-soprano and three clarinets BH

Fanfare for a New Theatre

for male chorus and ensemble BH

Canon on a Russian Popular Tune 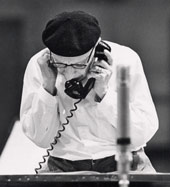 Last full year of conducting tours, which he is advised by his doctor to give up. Premiere of Requiem Canticles under Craft (Princeton).

for contralto and bass soli, chorus and orchestra BH

The Owl and the Pussy-cat

or voice and piano BH

Conducts for the last time (Toronto). Is twice hospitalised, with bleeding ulcers and a thrombosis.

Arranges Two Sacred Songs of Hugo Wolf. Flies to Zürich and receives from his eldest son the manuscript full score of The Rite of Spring, presented to him by Boosey and Hawkes on his 80th birthday. 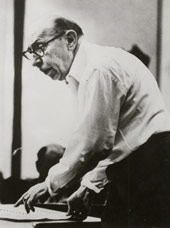 In a state of extreme physical decline, flies to Europe and settles for the summer at Evian (on the French shore of Lake Geneva), where he is visited by members of his family and photographed by Lord Snowdon.

Dies in New York (6 April). After a funeral service in New York, his body is transported to Venice and buried there on the island of San Michele.